Last week, the House of Representatives passed Resolution 119, which called putting a price carbon emissions “detrimental to American families and businesses.” The resolution passed largely on party lines, 220-180, with only four Republicans voting against the measure, likely due to immense pressure from conservative anti-climate groups, from the Koch Brothers to the American Legislative Exchange Council. While we commend Republican Climate Solutions Caucus members Carlos Curbelo (FL-26), Mia Love (UT-04), Brian Fitzpatrick (PA-08), and Ileana Ros-Lehtinen (FL-27), we were incredibly disappointed by the votes of the remaining GOP Caucus members.

Let’s be clear: a concurrent resolution like Resolution 119 is not a bill. It is a symbolic document expressing a fact, opinion, principle, or purpose. Need an example? Check out House Resolution 600, which passed in 2009 and said Michael Jackson was an American Legend and global humanitarian. Perhaps more on topic is the introduced House Resolution 825, which says climate change is a threat to the outdoor recreation industry. In both resolutions, there is no call for action included, only a statement of opinion.

Voting in favor of a resolution then is strictly emblematic as it does not result in any change in law. Therefore, there are limited consequences to voting one’s opinion. Last week, House members were not voting on whether or not to put a price on carbon emissions, but rather whether they thought putting a price on emissions would be bad for the economy.

But counter to the opinions highlighted in Resolution 119, numerous peer-reviewed economic studies show the opposite. There is a 95% consensus among economists that the US government should commit to curbing carbon emissions, with 81% in support of a market-based approach, like putting a price on carbon. The cost of a changing climate is far more expensive than the economic impact of carbon pricing itself; studies say that over the last decade, climate change has caused an average of $240 billion in damages in the US each year.

Let it also be known that both oil companies and high-profile Republicans are on the record in support of a price on carbon. Exxon Mobil, BP, and Royal Dutch Shell have all publicly backed the idea. In addition, former Republican Secretaries of State James Baker and Charles Shultz told The New York Times that “taxing a carbon pollution produced by burning fossil fuels is ‘a conservative climate solution’ based on free-market principles.”

At POW, we believe carbon pricing is one of the most effective policies for rapid reduction of greenhouse gas emissions. If we want less of something, we can make it more expensive; it’s simple. And, when burning fossil fuels becomes too expensive, you can count on a national transition to cleaner sources of energy like solar and wind. It’s a win-win. Want to learn more about carbon pricing? Check out our Carbon Pricing 101 guide and find resources (from videos to infographics) on carbon pricing on our Policy Agenda.

Since 2016, the Climate Solutions Caucus has been adding members, one Democrat and one Republican at a time, to “explore policy options that address our changing climate.” The group currently has 43 Republican members, yet only four opposed House Resolution 119. Just think, if all of the Republican members had voted against the Resolution, it would have failed. 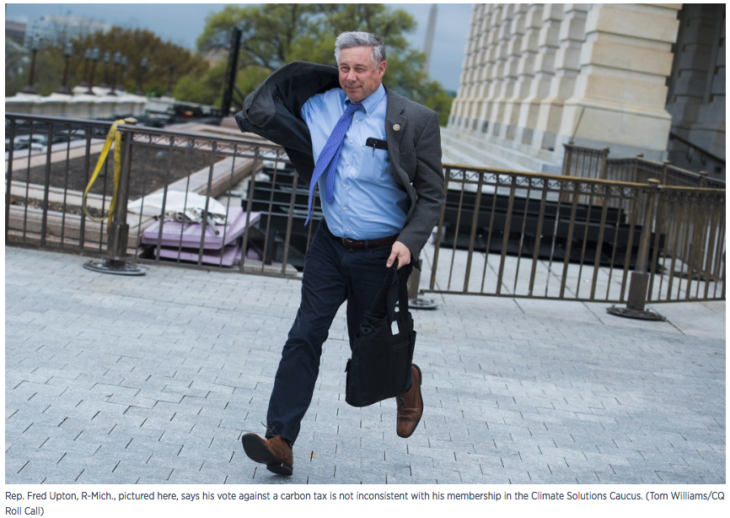 It is a profound disappointment to say that Protect Our Winters can no longer support the Climate Solutions Caucus as a body who will implement solutions to climate change. While we understand the desire to create a bipartisan dialogue on climate change, bipartisan leadership is somewhat meaningless if it will not yield solutions.

Fortunately, we have the opportunity to show our disdain for this vote. We can speak out by voting in the 2018 midterm elections, which are now more important than ever. Our sister organization, POW Action Fund, is working to provide you with the tools and resources you need for the upcoming elections. Pledge to vote here or by texting VOTEPOW to 52886.