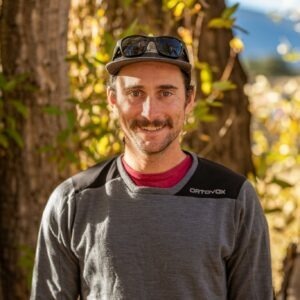 Aaron Rice loves to ski good snow. So much so that in 2016 he broke the world record for most human-powered skiing in a calendar year; climbing and skiing 2.5 million vertical feet. He grew up skiing New England, alpine racing and making weekend trips up north looking for powder stashes in the glades. At the University of Vermont, he studied Environmental Science and spent most mornings in the mountains skiing into the backcountry. After graduation, he spent the next five winters in Alta, UT skiing as much as possible, culminating in the world record.

Since breaking the record, Aaron moved back to Vermont and works at an environmental consulting firm. His goals now are more focused on finding a balance of activities, work, time spent with important people, and giving back to the communities that matter. He is guiding students at UVM and introducing them to the backcountry. He is involved in the local train organizations and working with POW to promote solutions to climate change that will allow us to continue recreating in the places we love. And, of course, he is still skiing most mornings before work, with over 120 days and 350,000 feet of climbing this most recent season.