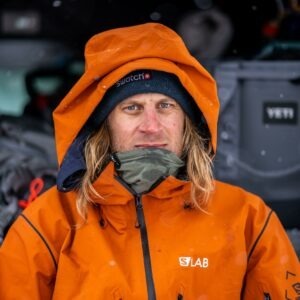 From his first ski run at Squaw Valley at the age of 2, Cody Townsend knew he had found his passion. He spent his early years chasing legends like Shane McConkey and Kent Kreitler around his home mountain before being recognized in his own right as an up-and-coming big mountain skier. Since turning pro a decade ago, Cody has constantly pushed the limits of fun and adventure. From skiing what some have called “the most insane ski line ever” to adventuring in the Arctic and hanging in the backcountry with his buds, Cody embodies what skiing was meant to be: a journey of exploration and relentless passion in the company of friends.

Cody Townsend is the creator and star of The Fifty, a digital video series documenting his attempt to climb and ski all of the ski objectives laid out in the book, Fifty Classic Ski Descents of North America. Cody has seen the impacts of climate change firsthand during his travels for The Fifty, going sofar as to predict that his descents may be the final descents for some of the featured lines. He lives in Lake Tahoe, California, with his wife, Elyse, son, Indiana, and dog, Theo.