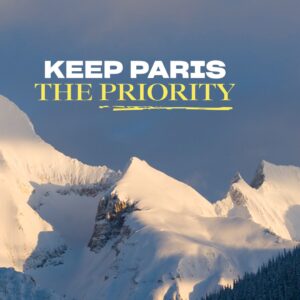 Adopted on December 12, 2015, the Paris Climate Agreement is an international pact focused on the common cause of combating climate change. The central aim of the agreement is to strengthen the global response to climate change and set goals and a timeline to keep global temperature rise (above pre-industrial levels) below 2 degrees Celsius. To achieve this ambitious goal, each country sets a plan to reduce emissions, adjust its financial regulations to create a “pathway towards low greenhouse gas emission and climate-resilient development” and plan for the adverse impacts of climate change. Called “Nationally Determined Contributions” or NDCs, this bottom-up strategy allows countries to determine their own goals rather than having the international community dictate what sovereign nations must do. This structure was key to the near-universal adoption of the Paris Agreement. The pact also creates a framework for transparent monitoring, reporting and escalation of goals.

Leaders of 195 nations agreed to the pact and committed to combating climate change. The only major emitting countries to not formally join the agreement are Turkey, Iran, and, now, the United States. On June 1, 2017, President Donald Trump announced his decision to withdraw the United States from the Paris Climate Agreement, and the country formally left on November 4, 2020.

In the years following Trump’s announcement, cities, states, businesses, universities and others have announced their support for the Paris Agreement and their commitment to the goals it outlines. In fact, many of POW’s partners have committed to the Paris Agreement goals through the ‘We Are Still In’ campaign. These actors represent 65% of the U.S. population and 68% of the economy. Additionally, 138 cities, including some of the biggest in the country like Chicago, Los Angeles and Philadelphia have committed to 100% renewables. Even 43 electric utilities have decarbonization goals, including Colorado’s Xcel Energy, which aims to be 100% coal-free by 2030 and 100% carbon-free by 2050. This ground-up approach means the U.S. can reduce its GHG emissions by over 35% by 2030 without federal leadership—but it’s not going to be enough to meet the goals outlined in the Paris Agreement. The United States needs federal leadership to accomplish the necessary emissions reduction targets.

Protect Our Winters has been actively engaged in advocating for the implementation of the Paris Agreement, and a vocal critic of the decision to leave the pact.

The Paris Agreement seeks to mitigate the detrimental effects of global climate change, which in turn will help preserve the outdoor spaces we all rely on for our lifestyles. The entirety of POW’s policy agenda fits perfectly under the goals outlined in the Paris Agreement. Reducing and eliminating emissions from public lands, building a viable electric vehicle infrastructure, implementing a clean energy economy and relying on a carbon pricing system are all key pieces to the broad puzzle of achieving the goals of Paris.

President-elect Joe Biden has stated time and again that he plans for the United States to rejoin Paris upon taking office this January. Join us in urging Biden and recently appointed Climate Envoy John Kerry to recommit to Paris immediately upon taking over.

A Refresh on Paris

We know that 2015 was a long time ago and the intricacies of the agreement and its importance to the Outdoor State may feel a bit fuzzy. Luckily, we’ve put together an education series called Paris for Dummies that outlines exactly why rejoining Paris is so crucial for the future of outdoor recreation and our planet. Read up on everything Paris, below.

PART 1 — THE PARIS AGREEMENT, REMEMBER THAT?

PART 2 — THE PARIS AGREEMENT: VITAL TO THE HEALTH OF THE OUTDOOR STATE

PART 3 — THE PARIS AGREEMENT: CARBON EMISSIONS ARE BAD FOR BUSINESS

The United States is back in the Paris Climate Agreement! The Biden administration followed through with its pledge to rejoin the international pact on day one. This is a big win for the Outdoor State and a credit to the work you’ve done. Thank you!

While this is a major win, there’s still a big hurdle to overcome—Congress. We know the Paris Agreement is the lens through which all climate policy, both domestic and international, should be viewed, but that’s not possible without buy-in from our Representatives and Senators.

Knowing the world has just a few years left to make the structural changes necessary to limit the most severe impacts of climate change, we have no time to lose when it comes to implementing the policies necessary to reduce our carbon emissions. Join us in calling on our members of Congress to support the United States’ renewed commitment to the Paris Agreement and work with the Biden administration to advance bold climate policies.

We at POW are stoked to have a partner in the White House dedicated to addressing our changing climate, but we need Capitol Hill’s support, too. Let your Representative and Senators know you want them to work with the President in finding solutions to climate change.