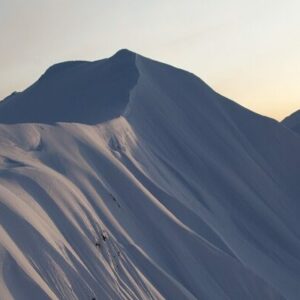 For every American that enjoys outdoor recreation, as well as the 4+ million Americans who work in the outdoor industry, our passions and livelihoods depend on a stable climate, a healthy snowpack, and access to our cherished public lands. Now, the places we live and love are facing one of the gravest threats yet, with a massive oil and gas drilling proposal in the National Petroleum Reserve of Alaska (NPRA), called the ‘Willow Project.’ But guess what… we’re no strangers to big fights for Alaska’s public lands, and we’re gearing up for a huge push to stop the Willow climate bomb from moving forward.

That’s right, Protect Our Winters has long advocated for the protection of Alaska’s iconic public lands from extraction. We’ve fiercely advocated to ban drilling in the Arctic National Wildlife Refuge since 2017, and now it’s time to rally the Outdoor State  once again. Your voice is critical to ensuring the Bureau of Land Management (BLM) stops the Willow Project!

Willow is the single largest oil extraction project proposed on federal lands, estimated to add more than 250 million metric tons of CO2 to the atmosphere over the next 30 years — equivalent to the emissions from 66 coal fired power plants (roughly 1/3 of all U.S. coal plants) or from 56 million vehicles over an entire year. With plans calling for up to 250 wells, 37 miles of roads, 389 miles of pipelines, airstrips, and a new central processing facility to be built, the Willow Plan would contribute more Greenhouse Gas (GHG) emissions than any other proposed project on America’s public lands.This will devastate efforts to reach emission reduction targets and keep global warming below 2º celsius. Quite simply, this is a massive carbon bomb waiting to detonate.

Approval of the Willow Project was pushed through in the waning days of the Trump Administration and faced litigation in court shortly thereafter. In July of this year the BLM released a Supplemental Draft Environmental Impact Statement (SDEIS) addressing the implications of the Willow Project, and have now opened up a public comment period that extends through August 29th.

Join Protect Our Winters in submitting a comment to the BLM. It only takes a couple minutes and has a huge impact in ensuring the Willow Project never breaks ground.