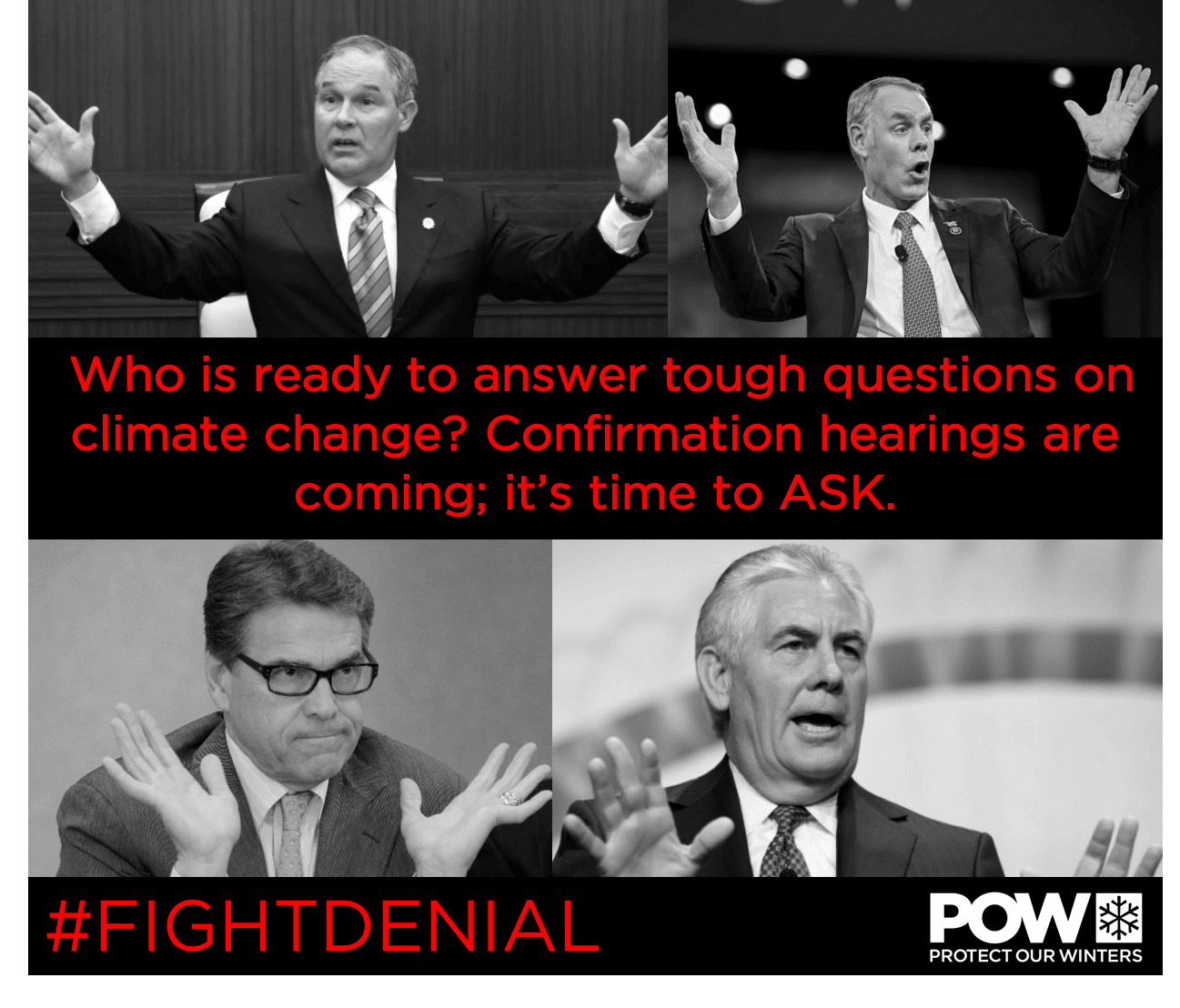 Confirmation Hearings Are Coming, Contact your Senator and #FightDenial

President-elect Trump has nominated a cabinet full of climate change deniers and skeptics.

The real question is how can we stop these climate deniers and skeptics from leading the very agencies that address climate change? Starting this week, the Senate will hold confirmation hearings. First up was Exxon Mobil CEO Rex Tillerson earlier today, and it looks like the rest will be scheduled for next week.

We need you to contact your senator and ask them to pose tough questions on climate change, oppose these nominations, and fight denial.

We’ve done our research, and we’ve written a question for each of the four nominees who run the agencies charged with addressing climate change. All we need you to do is contact your senator.

We’ve made it easy for you; you can quickly send an email here or read more about the nominees, below.

Rex Tillerson has served as CEO of Exxon Mobil since 2006. At a 2015 shareholder meeting, he responded to a question indicating that he did not think climate models were sufficiently reliable to make policy. He has also commented that technology “will surely save us” and believes we can utilize geoengineering to solve climate change. His job title alone makes his positions clear; Tillerson runs the world’s largest publicly traded oil company and the fourth largest fossil fuel company, with control of 7.960 GtCO2 in their proven fossil fuel reserves. For a little comparison, in 2015, global emissions totaled 36.3 of GtCO2. Tillerson and Exxon, then, have the ability to emit almost a quarter of the world’s carbon emissions. Though it’s hard to peg him as a denier, Tillerson has been a leader at Exxon during their long term campaign to deceive shareholders and the public about the impacts of fossil fuel extraction.

As a Distinguished Eagle Scout, Silver Buffalo Award recipient, and a former national president of the Boy Scouts of America, you undoubtedly follow the motto “Be Prepared.” How do you suggest we prepare our nation for the future by addressing climate change in the next four years?

Tillerson’s hearings will be conducted by the Senate Committee on Foreign Relations.

Scott Pruitt currently serves as the Oklahoma Attorney General. In May 2015, Pruitt said the debate on climate change “is far from settled,” and that “scientists continue to disagree about the degree and extent of global warming and its connection to the actions of mankind.” Pruitt has spent most of his energy suing the agency he will now lead—from challenging the EPA’s rules on air pollution, mercury and toxics protections, and regional haze, to leading the fight against the Clean Power Plan. He has even sued the EPA for being sued himself. Even more, Pruitt is “fueled” by funding from the fossil fuel industry. Back in 2014, Pruitt wrote a letter to the EPA telling them they were ridiculously overestimating air pollution caused by natural gas drilling. Shortly after, it was leaked the letter was actually written by Devon Energy—one of the biggest oil and gas companies in OK.

You have been nominated to lead the agency charged with protecting human health and the environment through ensuring compliance of environmental laws passed by Congress, from controlling the emission discharge of pollution to regulating waste and clean-up of contaminated sites. Your official biography states that your focus as an attorney has been on “fiscal responsibility, religious freedom, and pro-life issues.” Your education covers political science, communications, and the law. What experience do you have in environmental science that qualifies you to run the Environmental Protection Agency?

Pruitt’s hearings will be conducted by the Senate Environment and Public Works Committee.

Rick Perry served as the Governor of Texas from 2000 to 2015. When he ran for president five years ago, he famously stated that he would do away with the Department of Education and the Department of Commerce. He intended to add the Department of Energy to that list, but he forgot the agency’s name and concluding his remarks with “oops.” Now, he is poised to lead the agency who he has vowed to abolish (if he could only remember its name). The current Energy Secretary is a nuclear physicist, and Perry barely passed his classes: he took four chemistry courses, earning two Cs, a D, and an F. Now, he will negotiate nuclear deals and manage fossil fuel extraction regulations. Don’t worry though, he made it through one round in the 23rd season of Dancing with the Stars! Most recently, he resigned from the board of Energy Transfer Partners: the company building the Dakota Access Pipeline. And on climate change? At a roundtable last year, Perry noted his concerns for Obama’s efforts to cap carbon emissions, saying “I don’t believe that we have the settled science by any sense of the imagination to stop that kind of economic opportunity…Calling CO2 a pollutant is doing a disservice the country, and I believe a disservice to the world.”

As Secretary of Energy, you will be responsible for many decisions regarding where our energy comes from. This year, Georgetown, Texas will become the largest city in America to go 100% renewable on entirely wind and solar power, all while having the lowest electricity rates in Central Texas. As the former governor of this state, you have firsthand experience of how wind power can create jobs, derive income for landowners, and drive energy prices down for consumers. In fact, in 2006, you signed legislation to increase the production of wind. In your new role, how will you work to grow the clean energy economy?

Perry’s hearings will be conducted by the Senate Environment and Natural Resources Committee.

Ryan Zinke was elected in November 2014 to Congress after serving a term in the Montana Senate and retiring from his career as a Navy SEAL. Zinke holds the strongest track record on the environment. In 2015, he was the only Republican to vote for reauthorization of the Land and Water Conservation Fund. He also opposes conservative efforts to transfer lands from the federal government the states. When it comes to climate change, Zinke is not a denier, but he questions if it’s human caused. Zinke commented, “I think without question the climate’s changing—it has always changed, but it is changing,” he said. “If you go up to Glacier Park, you have your lunch in one of the glaciers, you’ll see the glacier recede while you eat lunch. So I have seen the change.” But he doesn’t seem to get the connection to fossil fuels and remains an ally of Montana’s coal industry. “Something’s going on,” he said. “It doesn’t mean I think you need to be destructive on fossil fuels.” The worst part? He used to support climate action. But, now, in Congress, he’s a staunch supporter of fossil fuels. He’s defended regulatory loopholes for the coal industry and co-sponsored an act to expedite pipeline projects. His lifetime score with the League of Conservation Voters is a whopping three percent (yes, out of 100).

You’ve been praised by the Outdoor Industry Association for your positions on public lands, which are crucial to the $646 billion-dollar outdoor recreation economy. The snow sports industry is part of the outdoor industry and is imminently threatened by climate change. You understand that winters are changing—you’ve commented on glacial recession, and you no doubt see shorter winters and decreased snowpack in your hometown near Glacier National Park. How do you plan to address climate change and protect our winters to ensure the profitability of the snow sports industry and the future of their passion?

Zinke’s hearings will be conducted by the Senate Environment and Natural Resources Committee.