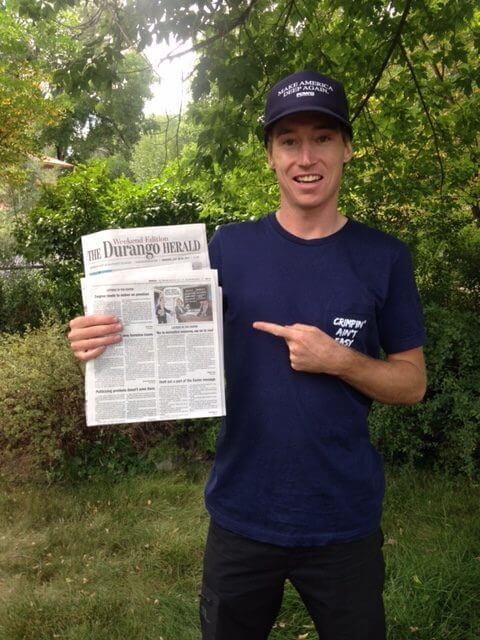 Dakota Jones: Yes to recreation economy, say no to coal

Professional trail runner and POW Riders Alliance member, Dakota Jones, recently wrote about the negative impacts of using our public lands for coal mining. Dakota is specifically concerned about a proposal to expand the King II coal mine, 20 miles west of his home town, Durango.

This letter to the editor, found here, was originally published in the Durango Herald. Here’s what Dakota had to say:

THE BUREAU OF Land Management is considering a proposal to expand GCC Energy’s King II coal mine, 20 miles west of Durango. As a professional trail runner, I spend a lot of time outdoors on our public lands and believe this is a very bad idea.

Colorado is prized for its public lands and near-pristine environment. If we care about protecting our state’s land and economy from climate change, we have no business expanding coal mines. Emissions released from burning coal fuels climate change. We cannot use our public lands to mine for dirty energy.

The impacts of climate change are more apparent every year. Pine beetles are killing our forests; huge wildfires are destroying wildlife habitat and biodiversity; and the snowpack seems less predictable every year. Excessive greenhouse gas emissions are undoubtedly damaging our mountains.

Climate change threatens our economy, too. In Colorado, the outdoor recreation economy generates $28 billion in consumer spending and $2 billion in state and local tax revenue annually. This revenue is entirely dependent on the natural landscapes in which we recreate.

Especially when we have cost-competitive renewable alternatives for power, coal should never be considered. Furthermore, outdoor recreation in Colorado creates nearly 229,000 direct jobs – four times as many as the oil, gas and mining industries combined.

There is growing evidence that the coal industry is on an irreversible decline, and we have the responsibility to embrace a sustainable future.

Please help by opposing the King II coal mine.