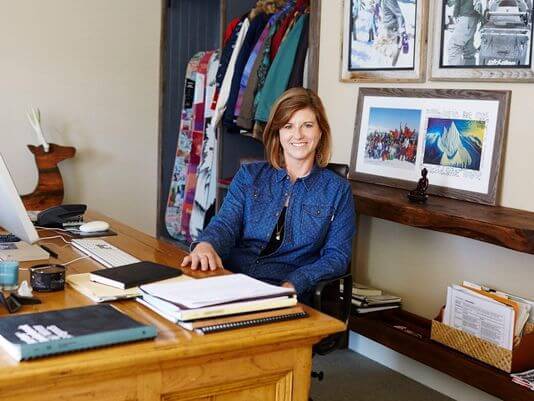 Donna Carpenter: For the Love of the Mountains, Let’s Put a Price on Carbon Pollution

WHEN MY HUSBAND started Burton 40 years ago, there were a lot of opinions about snowboarders: we were seen as rebels, risk-takers and renegades. But our motivation was simpler than that. We wanted people to fall in love with snowboarding.

Forty years from now, we want people to still be able to fall in love with winter. That’s why we’re committed to supporting what a growing number of countries, states and businesses have identified as the best solution to climate change and our dwindling snowpack – putting a price on carbon pollution.

The use of fossil fuels creates negative externalities that affect everyone, yet polluters don’t currently have to pay for this damage. Putting a price on carbon is a free market solution that cuts pollution and grows the economy at the same time. It is a win-win. It works by giving oil and gas companies an incentive to stop creating the pollution that is driving climate change while encouraging everyone to use cleaner energy, such as wind and solar.

Last year, lawmakers in Montpellier introduced legislation to do just that. This year, we need to act. Here are three reasons why.

First, we urgently need to take bold action to defend the people, places and lifestyle we love from climate change. Many people live in Vermont because of our great outdoors – from snow-topped mountains and winter sports, to fall foliage, farms and maple syrup.

Climate change puts all of these activities and industries at risk. Take winter sports. Since 1970, the northern hemisphere has lost more than a million square miles of snowpack. If this continues, or accelerates, it will mean shorter seasons, reduced revenue for resorts and fewer jobs for Vermont workers.

Across the world, climate change is having even more serious impacts, through rising sea levels, more intense hurricanes and drought conditions that fuel wildfires. We’ve seen all too much proof of this recently across our country, from Texas, Florida and Puerto Rico, to Montana, California and the Pacific Northwest. We must meet this challenge with action.

Second, putting a price on carbon will be good for our economy and job growth. Currently, we pay the price of pollution through its impact on our health, the environment, food systems, tourism and the outdoors. A price on carbon would shift that cost to polluters.

Vermont leads the nation in clean energy jobs per capita, but we are still heavily reliant on fossil fuels. A price on carbon would encourage more clean energy development right here at home, which means growing more jobs and keeping more of our hard-earned dollars in Vermont.

Finally, there is broad support for putting a price on carbon. More than 40 countries, and 20 cities and states already do this. Six states in addition to Vermont are considering joining California in doing so: Connecticut, Massachusetts, New York, Oregon, Rhode Island and Washington.

In addition, 138 companies – from Walt Disney to fossil fuel companies, including Exxon Mobil, the world’s largest – support it. Thought leaders, across the political spectrum, also see this as the simplest, faires, and most effective way to address climate change.

Of course, some falsely argue that putting a price on carbon would increase our energy costs. But that leaves out so many things, including the cost of doing nothing. Last month, Bloomberg News reported that the impacts of climate change are projected to cost the United States $1 billion a day within just one decade.

Those of us who love snowboarding and the outdoors still thrive on rebelling against business as usual. And we love being out in front on things. But in this case, I have to be honest: we all have some catching up to do. Let’s step up to this challenge and fight back, let’s hold polluters accountable for their carbon emissions.

As we say at Burton, everything we do started in the mountains. Protecting our climate is no different. It is about protecting the lifestyle we love. And a price on carbon is the best opportunity to do that for generations to come.

This piece, found here, was originally published by the Burlington Free Press.