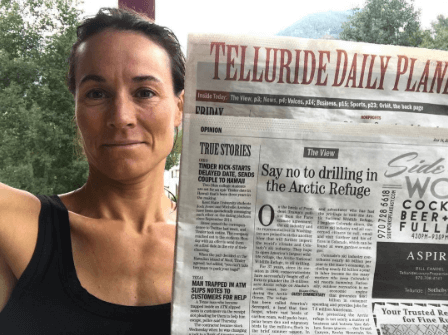 Hilaree O’Neill: Say no to drilling in the Arctic Refuge

ON THE HEELS of President Trump’s pullout from the Paris climate agreement, the oil industry and its representatives in Washington are poised to strike another blow that will further imperil the world’s climate and Colorado’s ski industry. They hope to open America’s largest wildlife refuge, the Arctic National Wildlife Refuge, to oil drilling.

For 37 years, since its creation in 1980, conservationists have successfully fought off efforts to plunder the 19-million-acre Arctic refuge on Alaska’s north coast, bordering the Arctic Ocean. The refuge has been called America’s Serengeti, a land that time forgot, where vast herds of caribou roam, wolf packs hunt, polar bears den and migratory birds by the millions flock in the brief summer season. In an era when almost no places on Earth have escaped the destructive hand of man, the Arctic refuge is one of the last best places, where visitors can feel like Lewis and Clark.

But even this most special place is, shamefully, not safe from this current administration and its oil industry lackeys in Washington. Alaska Republican Sens. Lisa Murkowski and Dan Sullivan have introduced Senate Bill 49, which would allow drilling in the refuge’s coastal plain. Stymied in her past efforts to plunder the Arctic refuge, Murkowski has told journalists that this could be the year they succeed.

As I write this, many Americans anticipate that Murkowski will try in the coming days and weeks to sneak language into the budget resolution process that would open the Arctic refuge to oil and gas exploration. The last time this was attempted, in 2005, sensible politicians successfully stopped the efforts on grounds that the budget process was not an appropriate vehicle for such a major decision affecting all Americans. Once again, we must implore sensible Republican senators to halt this assault. One of those senators is Colorado’s Cory Gardner.

Gardner’s website calls him “a national leader on energy efficiency initiatives,” and Gardner founded a bipartisan energy efficiency caucus while serving in the House of Representatives. As a skier and adventurer who has had the privilege to visit the Arctic National Wildlife Refuge, I implore Colorado skiers, the entire ski industry and all concerned citizens to call, email and visit Gardner and his offices in Colorado, which can be found at www.gardner.senate.gov.

Colorado’s ski industry contributes nearly $5 billion per year to the state’s economy, including nearly $2 billion a year in labor income for the many workers who keep Colorado’s ski resorts humming. Nationally, outdoor recreation is an economic engine that generates $887 billion in consumer spending and provides jobs for 7.6 million Americans.

But protecting the Arctic refuge is not solely a matter of business and bottom line dollars. Some places — the Grand Canyon, Rocky Mountain National Park, Yellowstone, Yosemite and the Arctic refuge — are simply too precious to destroy. Their highest value lies in leaving them as places where big nature can still be witnessed in all its glory.

Drilling, and the massive industrial infrastructure required to produce and transport oil and gas, would devastate the refuge’s fragile ecosystem. The refuge is incredibly remote and drilling there is risky. The inevitable spills of oil and other toxic substances would forever scar the land and disrupt wildlife. More importantly for our future, drilling there would be one more devastating blow to our climate.

We have a moral obligation to protect the Arctic National Wildlife Refuge for future generations. Colorado’s ski industry is at stake due to global rising temperatures. Senator Gardner, and all congressmen and senators who care about justice, economic prosperity and conservation of America’s last remaining wild frontier, I urge you to reject efforts by Alaska’s misguided politicians to hand over the Arctic refuge to Big Oil and Big Business.