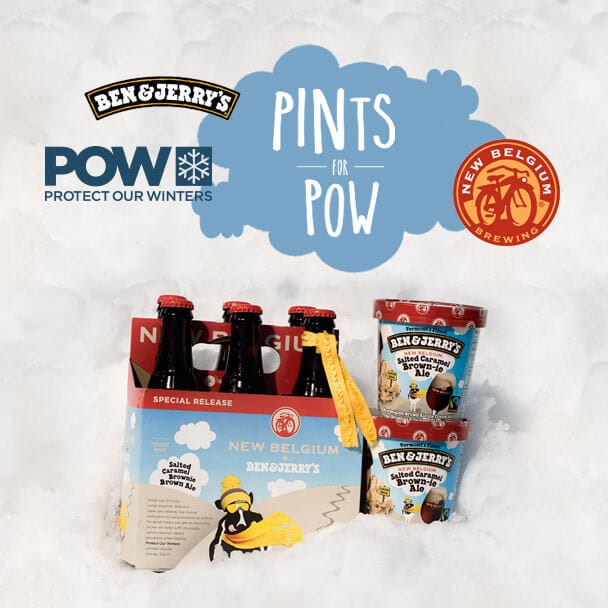 Hot on the heels of the historic Paris climate accord, New Belgium Brewingand Ben & Jerry’s are donating $100,000 to Protect Our Winters (POW). The two B-corp companies joined forces to create a beer and ice cream with a portion of the proceeds going to POW, a nonprofit that engages and mobilizes the snow sports community to lead the fight against climate change. On Friday, December 11 a check was presented to POW during a celebration at Stoney’s Bar and Grill in Denver that was chockfull of music, food, climate activism and, of course, beer and ice cream.

“We’re honored to have partnered with these iconic and environmentally-responsible brands,” said professional snowboarder and founder of POW, Jeremy Jones. “We’re using this partnership as a force for good, helping to make sure that our state governors know how important a strong climate policy is to everyone who wants clean air, water and a consistent winter season. Thank you to New Belgium Brewing and Ben & Jerry’s for this generous contribution to POW, which will allow us continue our advocacy work in 2016.”

In addition to fundraising for POW, the campaign encouraged people to generate letters of support for the Clean Power Plan. More than 2,200 letters were sent to Governor’s across the country voicing support for the initiative to reduce carbon emissions from the nation’s energy grid.

“The letter writing campaign was a great success and being able to give POW a check for $100,000 is the proverbial cherry on top of a partnership that just felt right from the beginning,” said Bryan Simpson, spokesman for New Belgium. “Partnering with Ben & Jerry’s, a fellow B Corp company that shares similar values, was a great experience and we’re thankful to everyone who bought the beer and ice cream to make the campaign such a great success.”

Ben & Jerry’s helped launch the campaign with an event in Washington, DC in October.

“We partnered with the coolest beer business a la New Belgium Brewing, made a pair o’ tasty products, partied with a Senator/POW athletes/and a couple of killer bands at the launch all the while knowing that it was an environmentally impactful and POWerful partnership,” said Ben & Jerry’s spokesperson, Sean Greenwood.