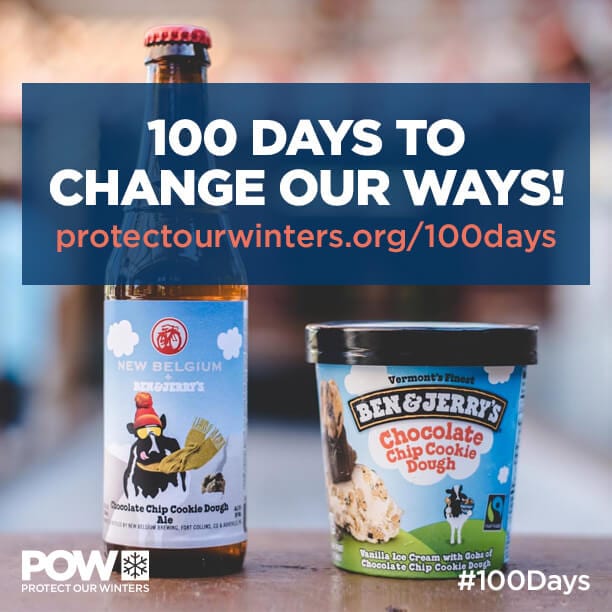 BOULDER, Colo.—November 16, 2016, Once again, New Belgium and Ben & Jerry’s have teamed up to create a limited-edition beer flavor, Chocolate Chip Cookie Dough Ale, to inspire action against climate change and urge the new administration to include climate policy on its agenda. A portion of the proceeds from the Chocolate Chip Cookie Dough Ale will benefit Protect Our Winters and fund climate activism.

New Belgium, Ben & Jerry’s and Protect Our Winters have named the campaign “100 Days to Change Our Ways” as the priorities presented in the first 100 days of a presidency often set the tone for the administration. The campaign calls for President-Elect Trump to move the country forward on climate change policy in his first 100 days agenda, not backwards, and advocates for the new administration to uphold the commitment the U.S. made as a nation and to the global community by signing the Paris Agreement earlier this year.

To rally support, events will be held in ten cities across the country, which will include letter writing stations, POW Riders Alliance athletes, raffles, and of course beer and ice cream.

Visit the campaign website, www.protectourwinters.org/100days, to learn more about how you can have an impact in the fight against climate change. The signed letters will be delivered to the new administration during inauguration week.

ABOUT PROTECT OUR WINTERS

Protect Our Winters is a 501(c)(3) nonprofit that engages and mobilizes the outdoor sports community to lead the fight against climate change through educational initiatives, political advocacy and community-based activism. Founded by pro snowboarder Jeremy Jones in 2007, Protect Our Winters works with businesses, athletes and the community to harness the collective power of the outdoor sports industry to take meaningful action against climate change. For more information, visit  www.protectourwinters.org