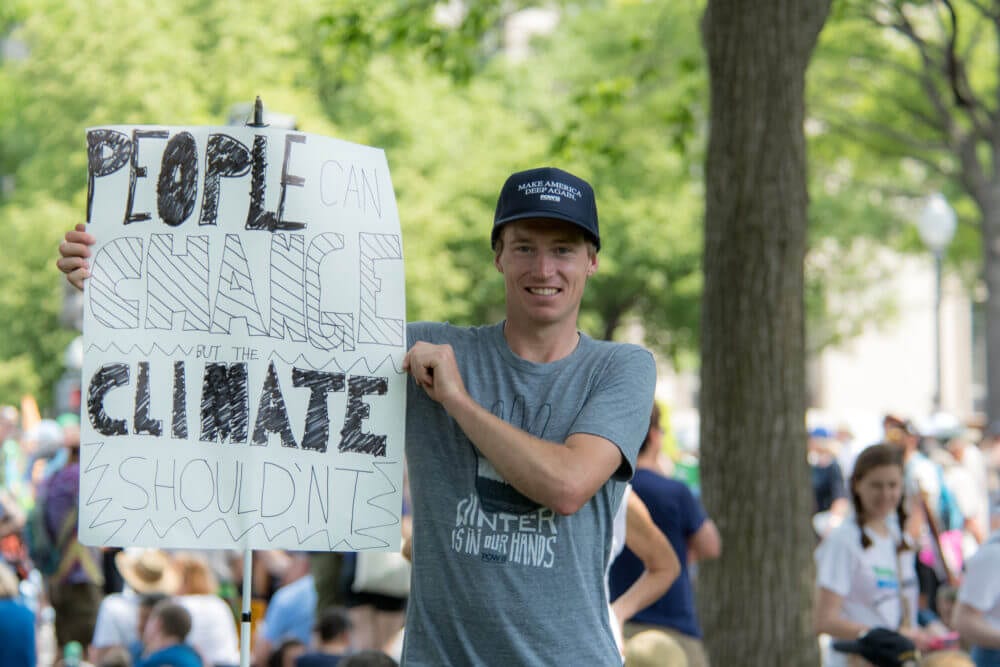 Reflections on the People’s Climate March in DC

There are not many places in America that resemble Washington DC. While the majority of the country still retains much of the vibrant new-ness pioneered in the 19th century in tandem with the advancing frontier, the American capital cultivates a more European style. It is defined by its architecture, by massive buildings of state and grandiose monuments. These are tremendous structures intended to impress upon all viewers the power and consequence of the United States of America. And with columns hundreds of feet high, roofs half a mile long, and ornately carved facades, the effect works. It’s vaguely aggressive, but undeniably stirring.

These buildings house the government’s highest leaders and therefore represent the country’s source of power. Therefore, when people have grievances with the government, there are more reasons to go to DC than to simply talk directly to government officials. There is a symbolism to being in the nation’s capital among the historical structures. That’s why I marched through the streets of DC on April 29: I wanted to make my voice heard about environmental concerns. And I wasn’t alone – 200,000 people made the pilgrimage to the capital that day to promote a collective vision of a sustainable future. But whether or not we were heard by those in power is difficult to say

The most fundamental reasons for protecting the climate are simple. We think the world is a great place to live, and we want our kids and their descendents to be able to enjoy it too. Therefore, everybody must do what they can to protect the environment, which is currently experiencing dramatic changes. But there are deeper reasons too, reasons which cannot be counted and can only vaguely be explained. They have to do with summer breezes through tall grasses, cold mountain rivers, and the clear calls of unseen birds; with the brutal silence of deep winter and the unquestioning patience of wild animals; with pride won from suffering. These add up to more of an effect than a thing, and it is impossible to describe and easy to ignore. Yet this effect is part of us all, because our nature comes from nature.

Natural systems in the Earth like climate, soil, and everything that depend on them are impermanent. Or perhaps cyclical, depending on your perspective. Therefore, it’s only fitting that the activists who advocate the value of these systems in the modern political world are impermanent as well. Marches come and go; movements rise and fall. This can feel like a handicap when arrayed against the forces of modern politics, which rest upon a philosophical bedrock of supposed innate values rooted in a concept of permanence. American values are supposed to represent human values in general, which is a concept that implies that certain values are separate from humans themselves; that there’s an objective world that transcends generations and technology where certain inalienable rights exist in stasis. From a human perspective, governmental institutions are nearly permanent, and the grand buildings that represent them seem permanent as well. But in larger terms we are still newcomers to the planet, and our laws and values are even newer.

It is this larger perspective that the environmental movement seeks to prioritize. In a world where the decree of a man thousands of miles away can create immediate and irreversible effects in natural and sacred landscapes, those in power must be held to the highest standards of intellect and responsibility. The goal of all leaders must be to create and preserve quality in the lives of their constituents. Since the 21st century world is profoundly globalized, people must be able to trust that their representatives understand the global repercussions of their actions. In the most powerful country in the world, no issue is local. The natural interconnectedness of all organic systems throughout the Earth – as well as the degree to which humans rely on them for survival – imply possibly the greatest need for knowledge and responsibility of all national decision-making. Currently, large populations of the United States don’t feel that the current leaders are taking these larger perspectives into account. Thus, to be heard, we march.

The People’s Climate March was presided over by the bombastic durability of the great buildings of state. They framed the procession of hippies not so much defiantly as inertly. These were in sharp contrast to the temporality of pro-environment slogans printed on thin paper and the simple fact that people cannot march forever. 200,000 people gathered in the streets of Washington DC and marched for hours in support of a way of life that will give life to the future. It was a tremendous spectacle intended to shock and amaze with its scale and cohesiveness. Yet, once the marchers passed the White House, they largely scattered. I took a time-lapse of the intersection that marked the end of the march proper, and it is a record of dispersal.

Later, I walked through the streets of DC with a different mission: dinner. The city was still packed with people, all heading briskly in different directions. In my hand I held two signs which read like this: “People can change, but the climate shouldn’t” and “This is a sign; so are melting glaciers”. That morning we had held them high among the crowd, thrusting them defiantly toward the motionless stone walls all around us. Now I turned a corner, quietly rolled them up, and placed them into a recycling bin. The metaphor felt overpowering; letting go was surprisingly difficult. My hand lingered on them for a few brief seconds. Then I turned and walked away.

I went to dinner with the Protect Our Winters crew, but after recycling my signs I felt a sadness that seemed out of proportion to the circumstances. Marching all day and then scattering; creating signs and then throwing them away; protesting in the capital and then patronizing its businesses – these pointed to a profound futility. What is the point of any of this if we have no discernible effect; if my own passion doesn’t seem to last the day; if, in spite of all science and common sense, the government continues to enact policies in stark opposition to the desires and rights of its citizens to a healthy future?

But that was hardly the attitude at the table. I was new to POW, but already I felt like a family member, and my new friends told stories and jokes, shared pictures and laughed frequently. But I still brooded internally. I wanted an epiphany, a solution, an answer of any kind, but the sense of weightlessness still weighed me down. The only reprieve was to talk, so I did. At least I have friends to share the pain with, I thought. And you know what? I did find a solution of a kind. We were eating dinner in a grandiose stone building nearly across the street from the White House. That made me feel bit better about recycling my sign. Whereas the buildings of the capital are simply shells that house whichever regime (or restaurant) is in power at the time, the power of the protest signs is entirely internal. The energy and purpose portrayed on them pulse through the people and cannot die so long as they stay together and carry the message.

There is nothing more American in spirit than fighting a desperate, near-hopeless battle to the end.