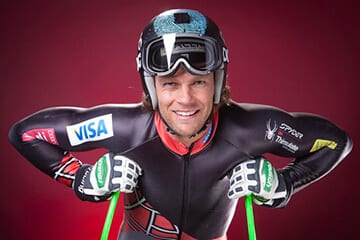 Steven Nyman: Winter Olympics future is murky if we don’t get a handle on climate change

Olympian and POW Alliance member, Steven Nyman, recently wrote about the warmer future of the Winter Games, and what this means for his family traditions, mountain economies, and society at large. Nyman explains the science, available technologies, and systemic changes needed to keep our winters cool and full of snow, not only for his children, but for many generations to come.

Nyman’s piece, found here, was originally published in USA Today. Here’s what he had to say:

DOES YOUR FAMILY have a “thing”? A particular hobby that you bond over, passing traditions, jokes and maybe even equipment down from one generation to the next? For my family, it’s skiing. I was only 2 when my dad, who ran a ski school, started teaching me to ski. Now that I have a daughter of my own, I can’t wait for her to learn to walk — so I can teach her to ski!

But by the time she grows up, and has kids of her own to teach to ski at entirely too young an age (as per family tradition), there could be a whole lot less snow around. If we do not find the courage to kick our fossil fuel addiction and transition to clean energy, we will warm the atmosphere to the extent that areas currently covered in white all winter long could see only sporadic snow.

For example, a study released last year found that by 2050, when my daughter will hopefully be putting my grandchildren on skis, the snow season across the U.S. could be cut in half. By 2090, when her children are raising their children, there could be as much as an 80% reduction in ski season length (costing the winter sports and recreation industry hundreds of millions of dollars).

The story is the same across the globe. Recent analysis of 21 cities that have held the Winter Olympics found that nearly half won’t be reliably cold enough to host them again by mid-century. Though snow machines have already proved able to take up some of nature’s slack in keeping runs covered, before long many past host cities just won’t be cold enough to sustain the snow and ice necessary to host again.

That’s not only a loss for those of us who carry on family traditions inseparable from the snow, but also a huge blow to the economies of so many mountain towns. Nationwide, the snow sports economy generates $73 billion annually. From lift tickets to hotel rooms to restaurant meals, our rural mountain economies rely on snow as their currency.

Fortunately, a melted future is by no means what has to happen. Though it will take a whole lot of effort, limiting warming to the 3.6 degrees Fahrenheit of the Paris climate agreement is still a possibility. Wind and solar power is getting cheaper and cheaper. Scientists are constantly improving how long batteries to store renewable energy can hold a charge, how quickly they can be recharged, and how cheaply they can be purchased.

There is no escape from using fossil fuels in our lives today; they are woven into the fabric of modern society. We each inherently have carbon footprint, and even though reducing that footprint is a good step forward, it’s not enough. We need to change the system. When we turn on our lights, we need that energy to come from clean sources, created without fossil fuels that cause so much carbon pollution.

The solutions are here. We just need to embrace them. That means voting for politicians who will increase funds for clean energy and energy efficiency and not propose drastic cuts. Research shows the vast majority of Americans want the government to invest in green energy and to limit our carbon pollution. But as long as our elected officials continue to prioritize coal, oil and gas, our emissions will continue to grow and our winters will continue to shrink.

And if you don’t love winter as much as I do, then I’ll just remind you that with fewer snow days, we’ll also be getting more extreme heat. For every degree Celsius (1.8 degree Fahrenheit) the planet warms, we could see as many as 34 additional days of heat waves per season. And without a decent snowpack, especially in the West, our rivers and reservoirs will store less and less water that we so desperately need in the warmer months.

A world where everyone’s sweating for an extra month or two, and with far fewer days to chill out on the slopes, is not the inheritance I want for my daughter. What about you?

Steven Nyman, an alpine ski racer on the U.S. Ski Team and a three-time Olympian, lives and trains in Park City, Utah. He was named to the 2018 Olympic team but won’t be competing in Pyeongchang, South Korea, due to an injury late last month. Follow him on Twitter: @Steven_Nyman