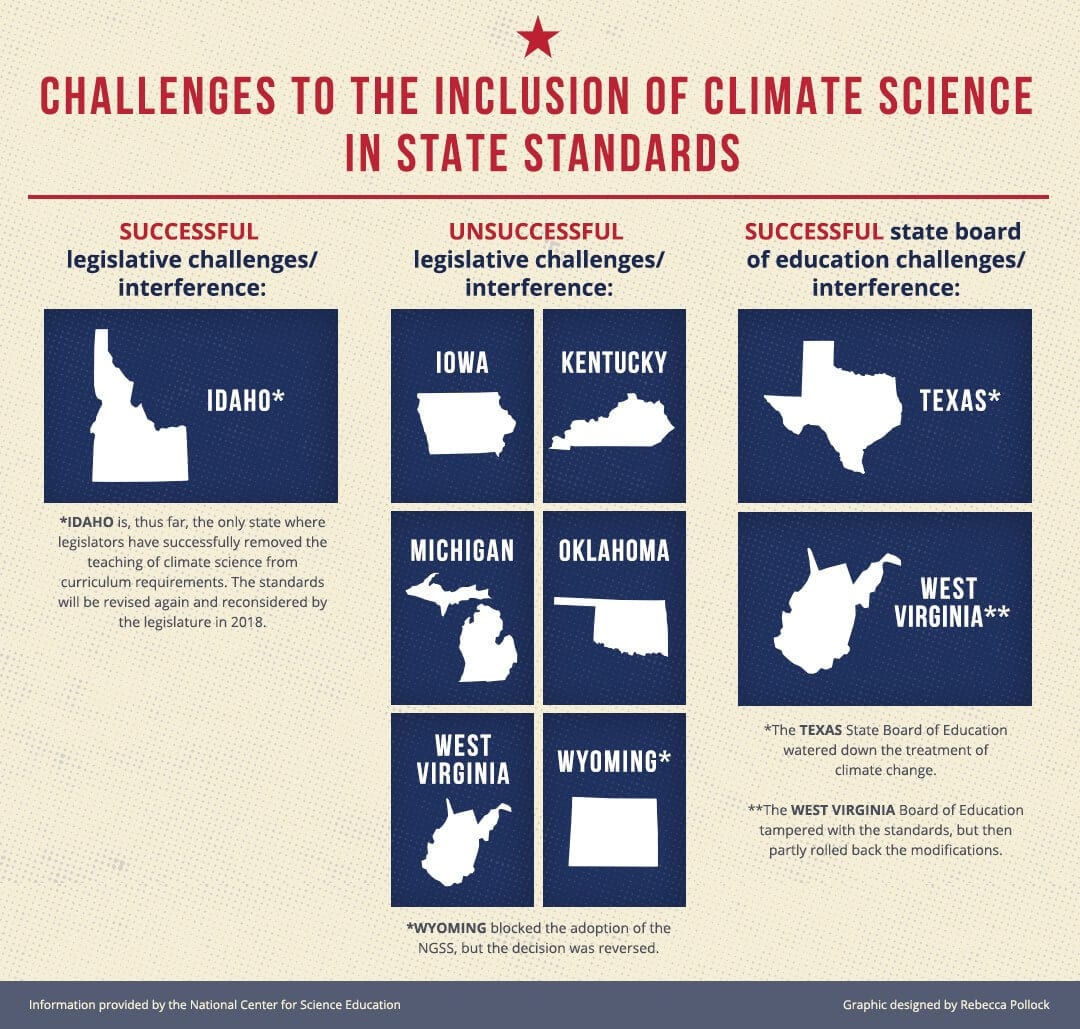 Should teachers include the impacts of manmade climate change in their curriculum?

One might think the controversy of this question would have fizzled by the year 2017. Perhaps buoyed by a president who publicly declared climate change a hoax, this sentiment is in fact gaining traction. A Frontline PBS report from May states that 13 measures have been introduced in 2017 that would “influence how topics like climate change and evolution are taught in public schools.” (no more are likely to appear this year as most state level bills are introduced by late spring).

POW sees the accurate dissemination of science in schools as paramount. To boost awareness in schools countrywide, POW started the Hot Planet Cool Athlete program in 2011. This program educates young students about climate change and inspires them to become the next generation of environmental leaders and has reached more than 45,000 students.

While this legislative trend is alarming, as of writing, just three of the 13 measures have been adopted. Nevertheless, there remains a sizeable percentage of our country’s constituents and politicians that simply have not accepted human-caused climate change.

Complicating the path forward, science curriculum is set at the state level, allowing for as many as 50 different curriculums. In an attempt to create some unity, the Next Generation Science Standards were introduced in 2013. These standards are a multi-state effort to create up-to-date science standards (and they unequivocally link climate change to human action). They are lauded by many scientists and educators. As of December 2016, 19 states, mostly blue leaning but also Kansas, Arkansas, and Kentucky, plus D.C. have adopted these standards. That’s almost 35% of the US student population.

But even these standards allow for interpretation and change (as seen below with New Mexico), creating a confusing landscape. To highlight some of what is going in, we look at three states—Florida, Idaho, and New Mexico—and what 2017 has brought to their science education world. 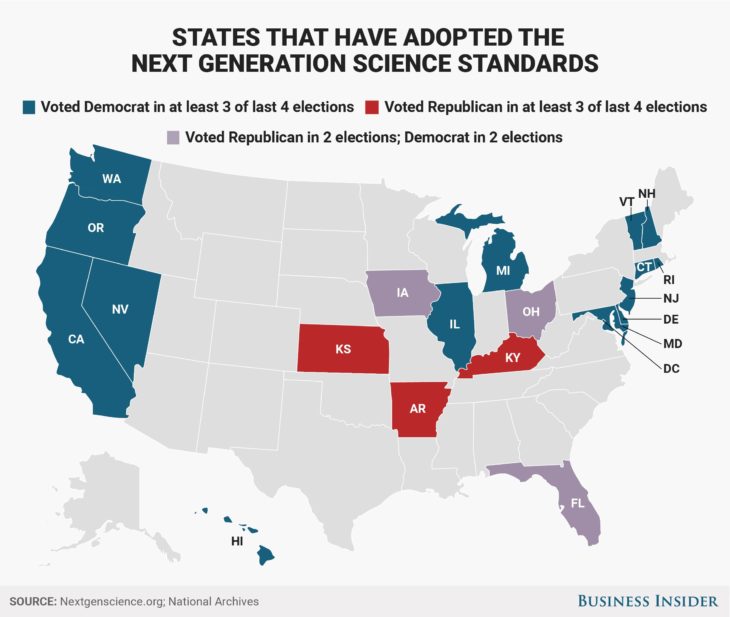 A Head Scratcher in Florida

Perhaps the most attention-grabbing example, HB 989 was signed into law in June. This bill makes it possible for any citizen in the state—parents or otherwise—to file a complaint to be reviewed by a “hearing officer” about any educational materials they object to in the public school system.

Advocates say science is not specifically the target, and the bill addresses other materials that may be erroneous or offensive (an economics textbook that critiques Ronald Reagan’s policies is mentioned), but opponents worry that this is a thinly veiled attempt to obstruct teaching kids about climate change, and other science-related topics. These opponents point to public affidavits by supporters of the bill who complain that evolution and global warming being taught as fact.

In the Frontline PBS report, The National Science Teachers Association’s executive director, David Evans, described it as “a way of banning books by folks who basically don’t like the results of science.”

An Unknown Future for Idaho

Idaho has also made headlines this year. In February, state lawmakers stripped references to climate change out of the new state legislature. The Senate Education Committee tried to convince the House otherwise, but couldn’t reach a compromise. The motion moved forward, with 370 out of the original 375 standards in place removing all references to anthropogenic climate change and passages on human’s impact on rising global temperatures. 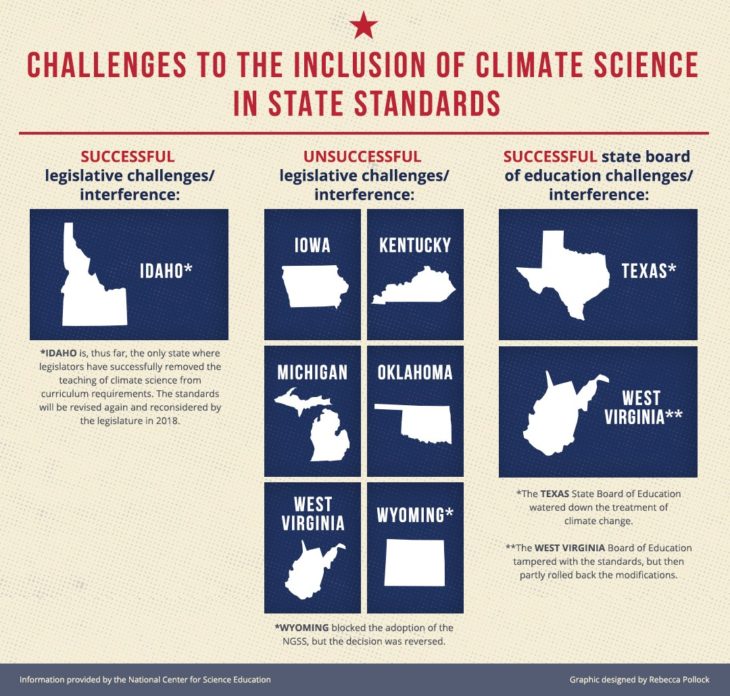 Then, this August the deleted content was rewritten to include some discussion on human-caused climate change, although in less direct language. The Board of Education allowed for these revisions and are currently in the comment period. Final approval will go to vote in 2018, and if the new revisions don’t pass, the state will revert back to their old standards, which haven’t been updated since 2001.

Jamie Essler is a high school science teacher in Kootenay County, Idaho, and believes it would be “quite significant if the new standards were approved.”

“If approved, it would put the new language on a list of mandatory standards, and would provide a great opportunity for teachers to learn new science,” Essler said.

A Win for Science in New Mexico, Kind of.

The Land of Enchantment has experienced a roller coaster of a year in teaching standards. The state has officially adopted the Next Generation Science Standards, and has taken a stance to implement them ahead of other states in order to set an example of a commitment to science. But something went awry in the adoption process. The standards were edited by the Public Education Department (PED) to erase components like the age of the Earth and labeling humans as largely responsible for climate change.

After those deletions, an outcry from citizens, teachers, and more—who unanimously opposed those edits—sent a message to lawmakers. In large part due to a public hearing in October where all 77 speakers were opposed to the changes made by the PED, the state decided to reword the standards again, going back closer to the original. A better, but not perfect solution many say. The age of Earth is back, as is an increased discussion of the role of humans in climate, (although there is not clear language stating humans as the biggest contributor), among other tenets.

As written in an opinion column in the Santa Fe New Mexican: “Rather than rewrite standards behind closed doors, New Mexico should just adopt the Next Generation Science Standards. That way, politics leaves the debate and school districts can go about the business of choosing textbooks while teachers develop new lessons.”

The new standards will go into effect in July of 2018.

The Kids Are Alright

Classrooms are a mixed bag of opinions, parent-influenced ideologies, and personal leanings, but the theme appears to be that kids want to learn about what is going on with the world.

“Students are hungry to learn about climate change. They tell me about it and say they wish they had started learning about it earlier. I’m thankful that I get to host a roomful of willing learners,” said Essler, who teaches 9th grade physical science and 11th grade AP environmental science.

He knows he is teaching in a community with conservative leanings with parents who may be giving their kids information that varies from his curriculum, but he sticks with facts, letting the kids decide, and not appealing to the emotional side.

“I do everything I can to de-politicize the topic. I frame climate change in the context of the tangible data of here and now, and it’s never my intent to use strong emotional appeal, such as fear to teach,” he said.

Jake Black, who is part of the POW riders alliance and who organizes educational visits to classrooms around the country as the organizer for the Hot Planet Cool Athletes program, reports seeing incredibly strong interest in kids relation to desire to learn, as well as mostly warm receptions from schools.

“We aim to teach kids about climate change, but also want to engage them as citizens,” said Black, who organized 40 assemblies in 16 states in 2016. Going forward, he says he wants to step out of their “bubble” and go into new communities.

This month, he will visit kids on a military base in Oklahoma. Despite having the aura of a place that might resist climate science education, he reports the kids and the school in Oklahoma are excited to welcome them.

Overall, legislators have not backed off their efforts to limit teaching the established tenets of science, and that is deeply troubling. However, the public vote seems to go against this political trend, and the vast majority of these bills have failed.

To engage on a local level that connects students to cutting edge teachings, and world-class athletes, consider getting your community involved in POW’s Hot Planet Cool Athletes program.