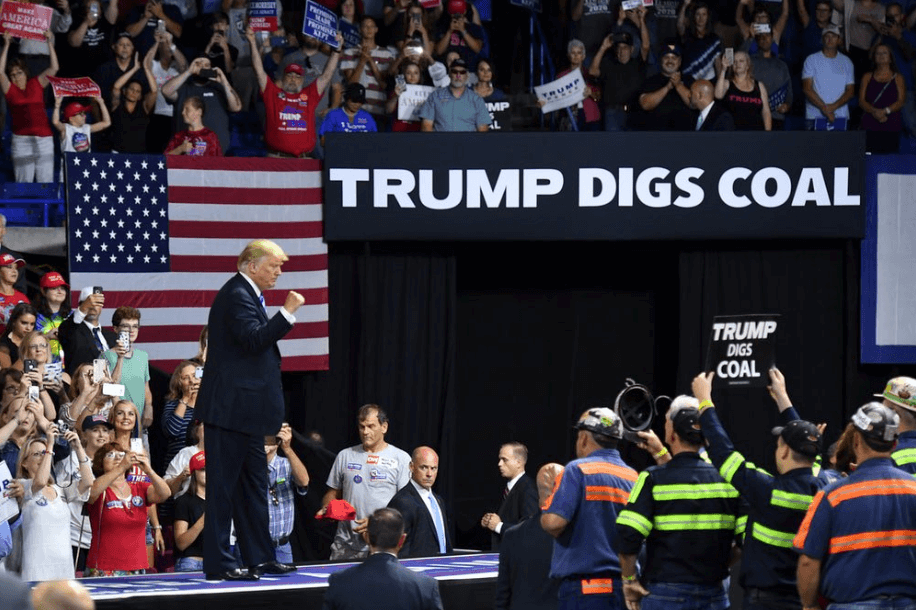 On August 21, the Trump Administration announced the long-awaited replacement to the Obama Administration’s Clean Power Plan. In October 2017, then-Environmental Protection Agency Administrator, Scott Pruitt, announced he would repeal the Plan. For months, we awaited a replacement, only to get our first glimpse at it this week. Unfortunately, the environmental community is in strong agreement: Trump’s so-called ‘Affordable Clean Energy’ Rule, is a dirty energy scam that we can’t afford.

Before we jump into Trump’s dirty energy plan, let’s review the Clean Power Plan (CPP). In 2015, the Obama Administration unveiled the landmark rule requiring the power sector to curb their emissions 32 percent by 2030. States were charged with coming up with plans to reduce emissions not just from coal-fired power plants, but also from the grid by investing in renewable energy and energy conservation. States were also required to meet specific emissions reduction targets.

Not only would the CPP have significantly reduced climate-driving greenhouse gas emissions from burning fossil fuels, but it also would have saved up to $45 billion in health care costs per year (in 2030), avoiding up to 150,000 asthma attacks among kids and up to 3,600 premature deaths. What more? It would have saved American families money on their electric bills, lowered the cost of renewable energy, and created hundreds of thousands of jobs.

While the ACE rule is a pretty cool sounding name, unfortunately, from POW’s perspective, that’s the only thing this rule has going for it. The ACE rule undoes a lot of the progress that the CPP was set to make in our fight for a stable climate and renewable future. Let’s dig into the details of what the Affordable Clean Energy (ACE) rule actually does:

JUST COAL Trump’s ACE rule pretty much slashes the CPP, cutting investments in clean energy, energy efficiency, and even the emissions reduction targets. Now, the rule looks only at reducing carbon dioxide emissions from coal-fired power plants, which will be achieved primarily through efficiency improvements (read: using technology and new techniques to limit the pollution that goes into our air). Unfortunately, this view is not comprehensive enough; we need to be addressing far more than just coal.

NOT ENOUGH The ACE rule plans to cut emissions by only 1.5 percent. Yup, that’s it: 1.5 percent. (Remember the CPP had planned to cut emissions from the power sector by 32 percent which would have dropped our nation’s emissions 19 percent below a business-as-usual scenario.) Even worse, the ACE rule has no minimum emissions reduction requirement for states to meet. Read: there’s no target or goal!

MORE WORK Trump’s new rule requires states to asses every coal-fired power plant they have, which actually amounts to considerably more work than the CPP required. Needless to say, states may be looking for opportunities to avoid this burdensome work. Fortunately for them, Trump included a long list of exemptions that give states latitude to opt-out altogether (for example, if compliance is too costly)

MORE POLLUTION Power plants can now produce dirtier air. One of the most detrimental parts of the ACE rule is buried deep within something called the ‘New Source Review’ program. The Trump Administration is changing the way companies evaluate power plant emissions, allowing them to ultimately emit more pollutants each year. The takeaway? Power plants can now emit more pollution and still comply with the so-called ‘Clean’ Rule.

POOR HEALTH The worse part? The EPA’s own analysis says that the proposal will lead to 1,400 premature deaths (and up to 15,000 new respiratory cases) each year due to the increased air pollution from particulate matter that’s allowed under the ACE rule. Yes, you read that right: 1,400 more Americans may die each year because of Trump’s new ploy to save coal.

TOO LITTLE TOO LATE The timeline? The Trump Administration announced ACE as a draft rule, meaning that the EPA will issue its final rule in early 2019. From that point, states then have three years to submit their reduction plans, and finally, the EPA will have one additional year to review. This basically means that the ACE rule’s measly 1.5 percent emissions reduction won’t even happen until at least five years from now!

So, why did the Trump Administration draft the ACE rule, rather than just scrapping the CPP all together? It gets a little complicated, but speculation suggests that it is to avoid lawsuits. In 2007, the Supreme Court determined that the EPA is required to regulate carbon dioxide as a pollutant under the Clean Air Act as it ‘endangers’ public health and welfare. So, scrapping the rule altogether would have resulted in many lawsuits. We should note that there is a lot of speculation that if Brett Kavanaugh is confirmed to Justice Anthony Kennedy’s Supreme Court vacancy, the Court may try to overrule this ‘endangerment’ finding.

TRUMP DIGS COAL – BUT THE INDUSTRY IS DYING ANYWAY

Fortunately for those of us who appreciate clean air, utility companies aren’t betting on coal. They know that in many cases, clean energy is less expensive and more attractive on their bottom line, so they are already moving towards investments in cleaner sources of power. For example, in POW’s home state of Colorado, Xcel Energy wants to source 55 percent of its power from renewable sources. So, Xcel put out some feelers into the clean energy industry and they got pretty shocking results: it is actually cheaper to build a brand new clean energy power plant with the ability to store wind or solar power (because we know it’s not always windy and sunny) than to operate existing coal-fired power plants. Utilities don’t want to keep putting money into coal; in many cases, clean energy is cheaper.

WE CAN’T AFFORD THE ‘AFFORDABLE’ RULE

The CPP was a great starting point for reducing our nation’s power-sector emissions over time, helping us meet the targets agreed to in the Paris Agreement. Even with the industry’s trend away from coal-fired power plants, the ACE rule still takes us off target and puts our future at risk.

When President Trump said “See what I did to that? Boom– gone” in regards to the CPP, he was right. Boom! Gone is a future where we curb power-sector emissions. Gone is an opportunity to better our climate. Gone is a chance to protect our winters.

WHAT CAN YOU DO?  – BELONG TO THE SOLUTION

While there will be a public comment period on the ACE rule, we have a president that rarely listens to public comment. Instead, we believe that voting is the best way to help us achieve a future powered by clean energy. Turn your passion into purpose and make a pledge to vote in November by texting VOTEPOW to 52886.

Learn more about the ACE rule with the EPA’s factsheet and find more details here, on the EPA’s website.