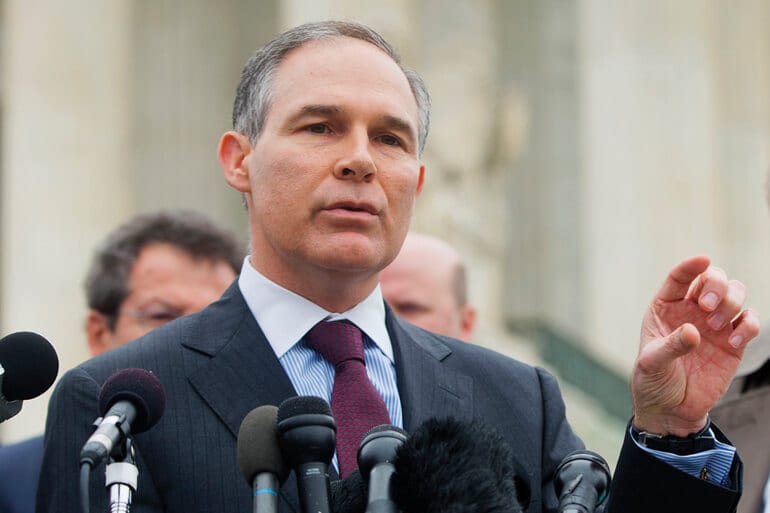 Who the heck is Scott Pruitt, anyway?

Yesterday afternoon, President-elect Trump nominated Oklahoma Attorney General Scott Pruitt to head the Environmental Protection Agency (EPA), the agency directed to protect human health and the environment. So, who is this guy?

In May 2015, Pruitt said the debate on climate change “is far from settled,” and that “scientists continue to disagree about the degree and extent of global warming and its connection to the actions of mankind.” Really, dude? Are the 97% of climate scientists who agree climate change is real and human caused not convincing enough?

Pruitt has spent most of his energy suing the agency he will now lead—from challenging the EPA’s rules on air pollution, mercury and toxics protections, and regional haze, to leading the fight against the Clean Power Plan. He has even sued the EPA for being sued himself!

Even more, this guy is “fueled” by funding from the fossil fuel industry. Back in 2014, Pruitt wrote a letter to the EPA telling them they were ridiculously overestimating air pollution caused by natural gas drilling. Shortly after, it was leaked the letter was actually written by Devon Energy—one of the biggest oil and gas companies in OK. Public office wasn’t designed for shamelessly standing up for private financial interests, right?

If we want to live in a country with strong climate regulations that protect some pretty important things like our PLANET, our HEALTH and our WINTERS, we just can’t have Pruitt running the EPA.

In January, the Senate will start confirming Trump’s cabinet nominees, Pruitt included. You can bet we’ll be in touch before then, asking you to tell your senator to block Pruitt’s confirmation.

Fired up now? Good! Write your senator and tell them we can’t afford to let a climate denier who has received funding from the fossil fuel industry run the EPA.