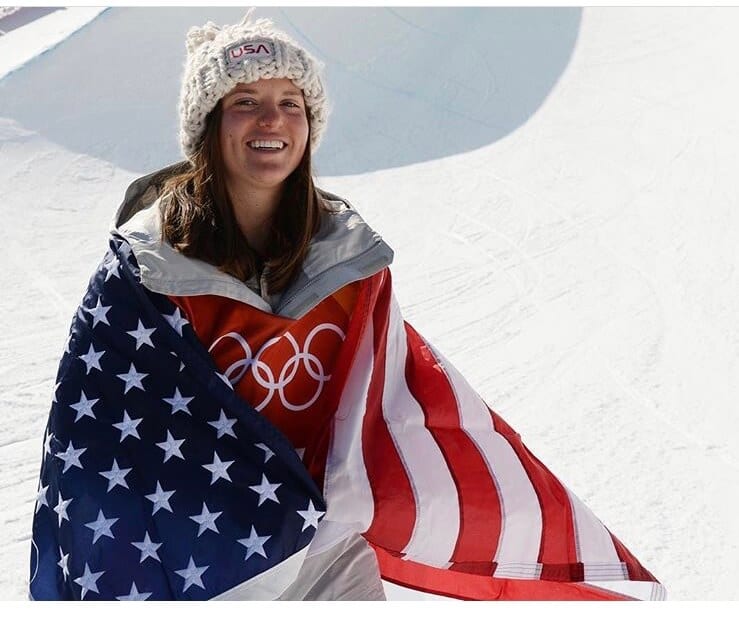 “To be an Olympian, one must be bold, daring, and willing to push beyond their comfort zone. Now Olympic athletes fight to preserve a world where future generations of winter athletes and enthusiasts can pursue their passions and their dreams.”

Protect Our Winters’ Executive Director Mario Molina teams with Mark Reynolds of the Citzens’ Climate Lobby to highlight the next challenge that these Olympians have chosen to take on –  this time on Capitol Hill.

This Op-Ed, found here, was originally published in The Hill.

One of the most electrifying moments of the 2018 Winter Olympics came when American cross-country skier Jessie Diggins surged from behind in the final seconds to win gold for her and teammate Kikkan Randall in the team sprint.

It was a gutsy feat. Watching the video, it’s easy to get emotional when you see the unbridled joy of Diggins and Randall celebrating at the finish line, becoming the first Americans to win an Olympic gold medal in cross-country skiing. Diggins‘ journey to the podium was the culmination of a lifetime of training and long hours, a labor of love that touches on a strongly held belief shared by most people in our nation: In America, if you have a vision and are willing to work hard for it, you can make your dreams come true.

Future Olympians may not get a shot at the dream Diggins achieved in PyeongChang. That’s because climate change is warming our winters, reducing our snowpack, and shortening our seasons — all changes that make it difficult to participate in snowsports.

Earlier this year, The New York Times reported that by 2050, many of the cities that previously hosted the Winter Games will be too warm to host them again. If the United States and other nations fail to quickly and substantially reduce the amount of heat-trapping gases being emitted into our atmosphere, the future of the Winter Games may be at risk.

Diggins and four other winter Olympians — Stacey Cook, Arielle Gold, Maddie Phaneuf, and David Wise — will raise their concerns about climate change Wednesday on Capitol Hill. At a briefing, hosted by Sen. Michael Bennet (D-Colo.) and Sen. Susan Collins (R-Maine), the athletes will share their concerns about the impact that climate change is having on winter sports and outdoor recreation.

“Over just the span of my career, I have witnessed noticeable changes in the sport of alpine skiing,” said Cook, a four-time Olympian. “From glacial recession in Europe to snow falling at only the highest elevations in New Zealand, many of our training venues worldwide have disappeared. And here in the U.S., where I train in California, the droughts have shuttered ski resorts and mountain towns as early as January. My youth was full of memories of learning, exploring and playing outside, and I want the next generations to learn about life through sport like I had the opportunity to.”

But it’s not just athletes who are worried about the impact of climate change on snowsports. Businesses and workers in the winter sports economy — an industry that generates billions of dollars in economic activity — are feeling the pinch. A recent report from Protect Our Winters found that in 2016, spending on skiing, snowboarding and snowmobiling in the U.S. supported more than 191,000 jobs, generating $6.9 billion in wages. The industry adds a total of $11.3 billion in economic value to the national economy. According to the report, “In low snow years, reduced participation decreased value added by over $1 billion and cost 17,400 jobs compared to an average season.” Thanks to climate change, these “low snow years” could become the new normal.

The Winter Olympians hope to highlight the urgency to reduce the risks of climate change, not only to save winter but also to limit costly consequences we’re already experiencing — record-setting storms, floods, droughts and wildfires.

A promising first step, the bipartisan Climate Solutions Caucus in the House of Representatives started discussing climate policies in 2016. The caucus, started by Reps. Carlos Curbelo (R-Fla.) and Ted Deutch (D-Fla.), has 72 members with equal numbers of Republicans and Democrats.

“I think you need to be able to stand up for things you believe in, and saving winter is something I believe in,” Diggins told The New York Times. “It just breaks my heart because this is such a cool sport, and winter is so amazing and beautiful and I feel like we’re actually really at risk of losing it. And I don’t want my kids to grow up in a world where they’ve never experienced snow because we weren’t responsible enough.”

To be an Olympian, one must be bold, daring, and willing to push beyond their comfort zone. Whether dropping into a massive halfpipe, nearing 90 miles per hour on a downhill course, or powering uphill, skating on skis, Olympians are driven to win. Now Olympic athletes fight to preserve a world where future generations of winter athletes and enthusiasts can pursue their passions and their dreams.

Mario Molina is the executive director of Protect Our Winters.