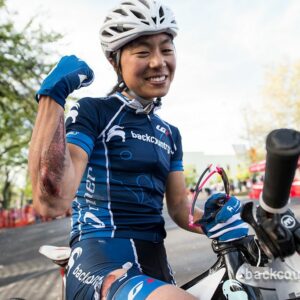 Evelyn Dong is a mountain bike racer that also dabbles in gravel, but her racing career started as a Nordic ski racer as a kid. Growing up in the Boston suburbs wasn’t quite the right fit ever, so she booked it out of there at 19 and since then has moved all over the west. The draws of both high alpine terrain and the deserts of southern Utah and Arizona keep her on the move. After a couple of seasons of racing World Cup mountain biking, she’s settled into the endurance gravel and mountain bike scene. Most importantly she’s the mom of a half-coyote American mutt hound named Mowgli.