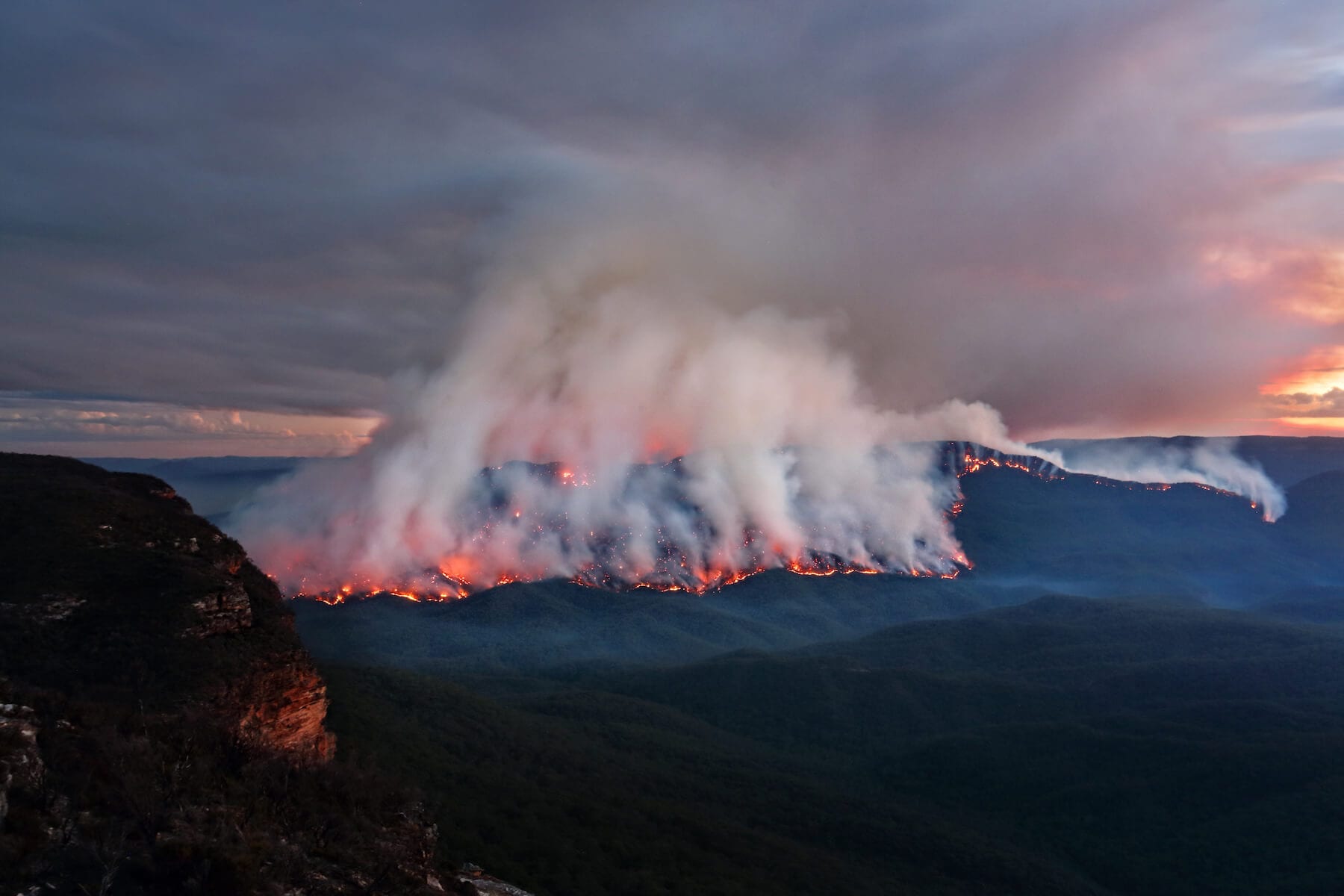 Australia Bushfires –– What You Need to Know

The Low Down on the Down Under

While you were getting bombarded with #newyearnewme in your newsfeeds, you may have also seen the much more devastating apocalyptic photos of Australia ablaze as the new year launched. Seen next to images of champagne glasses clinking and confetti raining down, the enormity of the Australian bushfires might be tough to understand. So let’s break it down.

Since September 2019, the Australian bushfires have:

Which is all to say, this is a massive crisis that demands the world’s attention.

Climate vs. Arsonists – What the Heck is Going On?

Jump to any article or social post talking about the relationship to the Australian bushfires and climate change (our own posts for example), and you’ll see a steady stream of comments arguing whether the cause of the fires was climate change or arsonists.

So let’s dive into this.

First up, the facts:

It’s currently summer in Australia, and hot weather and wildfires are not a freak occurrence. However, 2019 was a freakish year for Australia as the hottest and driest ever on record. Heatwaves swept through the country and temperatures peaked in December around 120 degrees Fahrenheit. Definitely NOT normal. And while wildfires are a regular occurrence, their current severity and persistence are absolutely out of the ordinary.

In addition to weather systems like the Indian Ocean Dipole and Southern Annular Model (feel free to geek out on those here and here) bringing unusually hot and dry conditions to the continent, Australia is also in its third year of drought, which Michael Roderick, a climate researcher at the Australian National University told the Sydney Morning Herald in November, has “never happened in the instrumental record.”

Seeing all of these forces combined, Sarah Perkins-Kirkpatrick, a senior lecturer at the Climate Change Research Centre at the University of New South Wales, Sydney told Vox, “If the climate wasn’t changing, the chance of this happening is ridiculously low.”

We’re going to take the scientists at their word.

Next up, the arsonists:

Let’s set the record straight. The “news” that nearly 200 people have been arrested for arson for igniting the bushfires is patently false. In the last week, a new study has shown that bots and trolls perpetuated these false claims in a disinformation campaign to exaggerate the role of arson and diminish the role of climate change in the Australian bushfires. What we do know is that only 24 people were arrested for arson, and that only 3-5 percent of the fires could be contributed to arson, the majority arising from lightning strikes and the severity and longevity of the fires exacerbated by climate change.

This disinformation campaign is unfortunately unsurprising, as Australia’s elected leaders have been reluctant to act on climate or even acknowledge its existence. Australia is the world’s largest exporter of coal and at COP25 named Australia as one of the “parties blocking progress toward settling the rules of the Paris climate agreement.” Despite the fact that Australia has already warmed by more than one degree Celsius since 1910, current Prime Minister, Scott Morrison, has refused to make the link between Australia’s greenhouse gas emissions, the bushfires and a changing climate. Time to #denythedenier, yeah?

What Does This Mean for the POW Community?

At the most basic, we have POW members all over the world––and even have an Australian chapter––so this crisis hits close to home. But even more than that, it shows that there’s still work to do. At POW, we envision a world that embraces renewable energy, electric transport, breakthrough technologies and market policies to achieve carbon neutrality by the end of the century. We drive to crags, trailheads, and renewably powered ski areas in zero-emission vehicles; individuals and industries pay a fair price for their carbon footprint; and elected officials from all parties at all levels of government make addressing climate their top policy priority.

As some react to the Australian bushfires with disinformation and climate denial, we hope you’ll join us in continuing to push for the future that we instead envision.