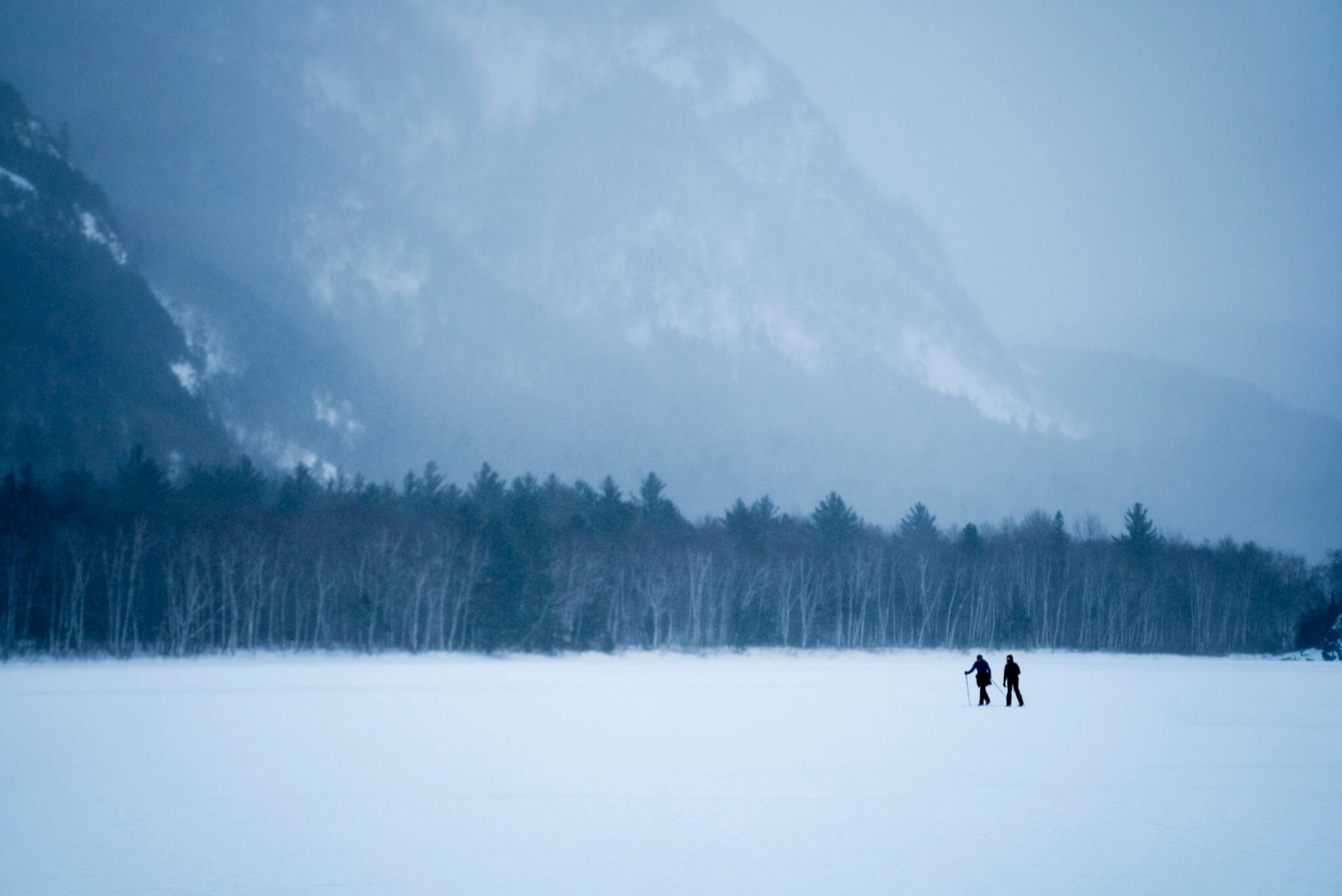 Man is born to die, his works are short-lived.

But Katahdin in all its glory, forever shall remain

the mountain of the people of Maine.

The sound of gunshots startled me awake. I couldn’t see anything in the dark, but I knew it was cold. We were deep in the wilds of Baxter State Park in northern Maine, a minus 20-degree sleeping bag covering everything except the icy tip of my nose. My mind went from zero to 60 in no time flat, trying to figure out where the shots were coming from. The trees! Sap expands and trees start popping when it’s ridiculously cold out.

We were 10 miles into a 70-mile, self-supported circumnavigation of the park. The only thing sillier than dreaming a well-armed militia was lurking to ambush a group of skiers? The fact that we were out here in the first place. Who wants to spend eight days camping in winter, pulling 80-pound sleds around a wilderness area in Maine?

“Brian! Time for dinner!” My mother’s dinner call muffled its way through the thick walls of my snow fort. I’d been digging, shoveling, and perfecting another snow cave since getting off the bus after school. With wet mittens, snow pants, and boots, I’d waddle into the house, shed my snowy gear, plop down for a delicious warm meal, and afterward think about the next phases of building. Maybe a new shelf to hold snowballs? Or another tunnel entrance? While school was fun, playing in the snow was all I could think about.

Growing up in Minnesota in the 80s meant cold, snowy winters. We never had “snow days” from school—we just had “cold days.” If the mercury dipped below –20, and if the winds were blowing, we might get a late start at best. It could snow three feet in one night and we’d still be lining up for the bus in the morning. Deep winter was simply a part of our reality, and I grew up to love it. As I got older, my ideas of playing in the snow changed, but only a bit. I started snowshoeing, cross country skiing, alpine skiing, and eventually fell in love with ice climbing and mountaineering. Perhaps it was my wintery upbringing, but I could never get enough winter. I still can’t.

This plan started simply enough. I wanted to get out on an extended winter backcountry mission here in Maine. A circumnavigation of Baxter State Park in the middle of winter was just crazy enough that it sounded perfect. After a couple months of emails, phone calls, and efforts to build a small crew of capable folks, the trip started to come together. As gear rolled in from brands keen on sponsoring the trip, we built our sleds, packed our bags, and then drove the four hours north out of Portland—Maine’s largest city.

Pulling into the parking lot at Abol Bridge, the plan became real. Did we have the skills and the gear to actually pull off this trip? What if someone got injured? What if we had a catastrophic gear failure? How would we get out? These questions were constantly on my mind, like the crunchy, scratching sound of pulling the sled behind me on crusty snow with every kick of my skis. Our route was laid out, our itinerary approved by the park rangers and our campsites reserved through the permit system. Approval and permits can seem like hoops to jump through sometimes, but Baxter State Park is a well-regulated park, and for good reason. The land was purchased in small parcels between the 1930s and 1960s by Percival Baxter. Today, the park encompasses over 200,000 acres and provides a wild recreation area for the public to enjoy. While the land of the park has always been used by locals of the region, it also provided an abundance of wood for local lumber companies and mills who were the heart of the local economy. Baxter attempted to compromise with all the stakeholders, but his ultimate goal was to keep the park “Forever Wild.” No paved roads, no concrete structures and a strict limitation on logging, hunting and motorsports. The regulations in place today exist because park users of the past ignored the problems they were creating and started loving the place to death. Abandoned sporting camps, garbage dumps and decaying automobiles were a product of the early years of the park, and as the governing body of the park grew in scope, the need for preservation became obvious. The park was cleaned up, gate houses were built at the two entrances, and the number of visitors was capped at trailheads and campgrounds in an effort to lessen the impact of humans on the landscape. Today, Baxter State Park once again feels like a wild place. Sure there are signs of humans, but the sense of adventure is endless.

Scott, Greg and I skied the first four days together. After a humbling first day, we started getting into the groove.  Not a soul was seen as we passed under Baxter Peak and the Knife Edge to the north. Views of Doubletop soon commanded our attention as we glided across ice covered ponds and provided some scale to our undertaking. Our first few nights out were cold, but our attention to the small details provided comfort. Warm sleeping bags, hot water bottles and plenty of food to stoke our internal furnaces were key. Without nearly 50 years of experience between the three of us, we might have been miserable. Instead we found joy in everything; the trailside breaks under snowy skies, cold fingers and toes and even our heavy sleds tipping over from time to time on uneven terrain. We just laughed. If you’re not having fun, what’s the point?

Every day seemed to be a continuously slow uphill slog. We joked about the fact we didn’t know a loop could be uphill the whole way as the time we spent with gravity on our side was minimal. Miles slid by underneath our feet and our systems got dialed in. Moving through wild lands triggered primal senses. Everything we needed to survive was with us. Our connection to the outside world dissipated as our connection to our surroundings blossomed.

As we traveled around the park for eight days this past February, we were fortunate to find cold, dry weather. We had to worry about frozen water bottles, frozen boots and frozen body parts like you should on any good winter trip. However, the day after we left the park, temps soared to the mid-30s, and rain fell on the mountain. Two weeks later and temps were in the 60s in southern Maine and our snowpack nearly disappeared over the course of a week. We’re used to a January thaw in New England, but we’d already had it, in January. I fear these unseasonably warm temps in February are a harbinger for what’s to come.

A place like Baxter State Park should act as a model for the fight against climate change. We’ve been on this earth long enough to begin taking it for granted. We expect the earth to absorb our lifestyles, our garbage, our pollutants. Unfortunately, our actions have consequences, and they’re taking a toll. 2016 was the hottest year on record, and during the month of February of this year, 1,500 record highs were broken around the country (contrast that with 10 record lows in the same month).

Perhaps the story of Baxter is one we need to adopt. We need to realize that we can’t continue to live unfettered lives without considering the consequences. We need restrictions in order to restore. We need limits in order to thrive, and even to live.

During our 8-day tour around Baxter Park, I knew in the back of my head we could complete the trip. We dealt with broken stoves, broken sleds, and mild hypothermia—but those obstacles weren’t grand enough for us not to overcome them. The same approach is needed to address climate change. Our problem is a global one, but our actions can be personal. There are a lot of simple things to do in our daily lives that can help reduce our individual impacts.

Of course it’s hard to do it all, but every small step eventually contributes to great distances travelled. We care, and we believe caring is contagious.

Check out the POW Seven to see how you can make an impact in the fight against climate change.

After returning from our trip, the general response was, “That sounds like a cool trip, but I’d never do it!” Well I’m heading back up to the park in less than two weeks and I’m ready for more winter. I can’t get enough! You can read more about our trip and follow future adventures by checking out www.thebaxterproject.com, and by following our sponsors through their channels, too! 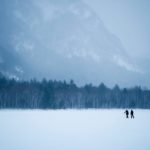 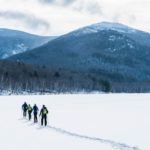 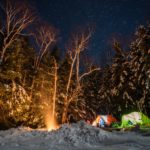 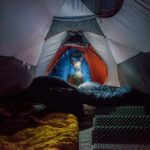 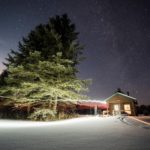