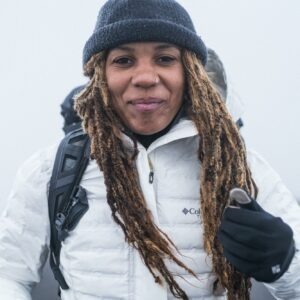 Faith Briggs is a creative producer, environmental justice advocate, documentary filmmaker and runner passionate about sharing contemporary stories from diverse communities. A self-described “professional nerd,” her studies at Yale University and the New York University Arthur L. Carter Journalism Institute focused on representation in media and inspiring global citizenship.
A high school and college NCAA Division 1 athlete, Faith was a 400-meter runner who balked at a mile-long warm-up until years after undergrad. While recovering from years of overuse and six consecutive stress fractures in her shins during college she read Born to Run and began running longer distances. She joined Black Roses NYC for two years while working at Discovery Channels in the Documentary Department. She left Discovery to travel the world with Columbia Sportswear. During a year of new experiences and adventures, including running the El Cruce 100k stage race in the Andes and the famed OCC ultramarathon of the UTMB series, she developed a sense of responsibility for the protection of our public lands.

Faith has spent the past few years working at Oregon-based non-profit organizations with a focus on connecting youth from underserved communities with the outdoors. The former program director at Soul River Inc., she now serves as the development director of the Global Works Community Fund.

In 2018 she produced Brotherhood of Skiing working with Wild Confluence Media and The Wilder Studio for REI. In 2020 she was the subject and producer of This Land, a short documentary where she ran 150 miles through threatened National Monuments delving into the complicated history of inequity in conservation. Both behind and in front of the camera, she works with brands, non-profit organizations, institutions and individual creatives to create media representative of the world we live in and the better one we are working together to create.