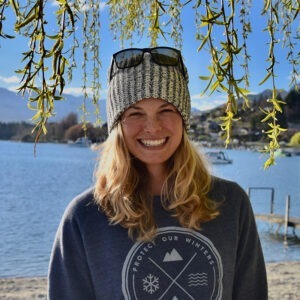 Jessie Diggins was cross-country skiing before she could walk, hitching a ride in her dad’s backpack, pulling his hair and telling him to ‘Mush!’ The apple didn’t fall far from the tree, and by three years old she was on skis of her own, sharing Dad’s passion for the sport. Little did they know at the time that a ferocious, ground-breaking competitor was in the making.

Jessie is known for two things, being able to “go deep into the pain cave”, ski-speak for pushing herself to the edge and beyond, and doing it with style, with a smile and with sparkles. Jessie began the team’s tradition of painting their faces on race day and finishing it up with a dusting of sparkles.
From Afton, MN, with a background in dance, swimming and soccer, Jessie was a nine-time Junior National Champion on skis. Within the senior ranks, she’s responsible for numerous American firsts:

Jessie Diggins: With a Medal in My Pocket