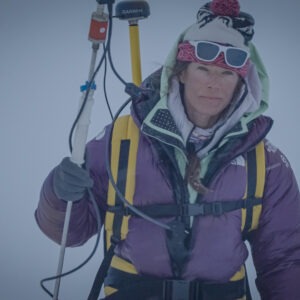 A Citizen Science and Film Project

In April 2022, POW Athlete Alliance member, Kit DesLauriers and her self-supported team traveled across a portion of Alaska’s Coastal Plain, which is currently planned to have seismic oil and gas exploration. During their journey, the team conducted snow depth measurements in a citizen science based approach to help determine if actual snow depths are in the cited range for acceptable oil exploration by the BLM in their Record of Decision. Based on DesLauriers’  previous travels across the Coastal Plain, her hypothesis is that the snow depths found will not meet the stated minimum of either a nine inch average, or three inches over the highest tussocks.

During the expedition, DesLauriers and her team also made the first ski descent of the second highest mountain in the Brooks Range, Mt. Hubley, making DeLauriers the first person to ski the five highest mountains in the United States Arctic.