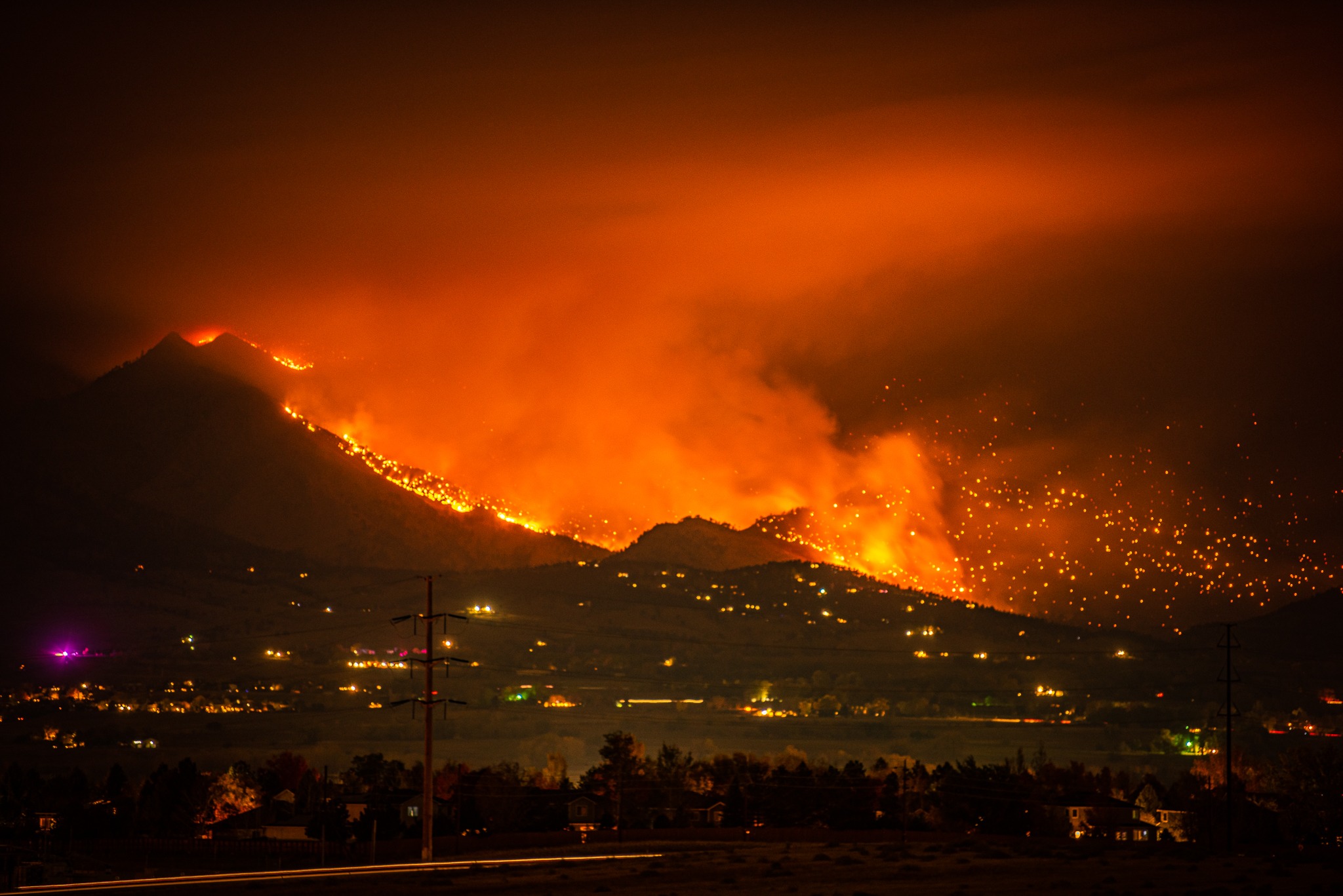 Late on Saturday afternoon, October 17, 2020, I was in the final stretches of a seven-plus hour drive back to Colorado’s Front Range after working remotely in Park City, Utah, for a few weeks. My wife sat shotgun and our dog snoozed peacefully in the backseat, the car was packed to the gills and our two mountain bikes clung to the hitch rack. We battled the typical crosswinds of Wyoming rattling eastbound on Interstate 80 and hoped for a respite as we turned south on US-287 into Colorado. I was gripped with anxious anticipation as we rolled past the crimson dirt and rocks near the northern border and paralleled the uplifted peaks of the Medicine Bow Range.

We knew that the Cameron Peak fire had flared up with the winds in recent days, that’s why we hoped the gusts stayed isolated along I-80. Nature didn’t pay much attention to our hopes. Our progress down the winding highway brought the monster into view. The pyrocumulus cloud towered into the atmosphere. It was a dragon with matches loose on the landscape, its tail began in the forest and its smoking head stretched out over the eastern plains.

We sat in near silence in the presence of what was now the largest wildfire in Colorado history, my eyes flicked back and forth from the billowing smoke cloud to the road. When we merged onto Interstate 25, the haze and smoke pervaded much further south than I would’ve expected. When we were safely home and I checked my phone, I discovered another fire had ignited in Boulder County, mere miles from Protect Our Winters’ headquarters. The CalWood Fire quickly became the largest in county history.

Saturday night, I snuck off into Boulder to get a glimpse of the fire from a distance. I arrived at Gunbarrel Hill intending to snap a few photos, but also to reflect.

jumpMy family returned to Colorado in part because we’d been away for three weeks, but, most importantly, because our ballots were waiting in our mailbox. The 2020 election is the most critical of our lifetime, and the fate of our public lands, our health and our safety rely on its outcome. Watching orbs of orange flames and blue and red emergency responder lights pulsate on the hillside above Boulder in the black of night just 16 days before the election was surreal. The tangible consequences of human-caused climate change were evident in the scene before me. Trails that I’ve ridden countless times on the bike that clung to my car hours prior were burning. An outdoor community that I’ve lived in and explored for years was caught in the throes of pre-evacuation, smoke and flames.

The 2020 fire season had already painted a terrifying picture of the impacts of the warming climate. The total acreage burned in California shattered records in 2020. And the Pine Gulch and Grizzly Creek fires in Colorado had covered the state in haze and spread the scent of campfire hundreds of miles. But, now, in October, a month when the threat of fire is usually low, fires continued to erupt and now marched on the doorstep of the Front Range Urban Corridor. On October 20, the US Forest Service closed all national forest land in Clear Creek, Jefferson, Gilpin, Boulder and Larimer counties, spaces coveted by outdoor recreationists on the Front Range, due to multiple fires. On October 21, the East Troublesome Fire in Grand County erupted, growing over 100,000 acres in a single day, and made its way into the mountain hamlet of Grand Lake, causing mass evacuations, property loss and a full closure of nearby Rocky Mountain National Park. On October 22, the fire continued its march eastward, jumping the 13,000-foot peaks of the Continental Divide and burning through the third-most visited national park in the country, causing a full evacuation of Estes Park.

With 50 million members in its ranks, the skiers, snowboarders, mountain bikers, climbers, runners and hikers that make up the Outdoor State have the power to spark significant change by using their voices and votes this fall. Showing up for our public lands is the first step toward extinguishing a scorching climate future.

There’s still time to make your own plan to vote. Use the tool below to get started.

Get started with our Make A Plan to Vote Tool, and we’ll: